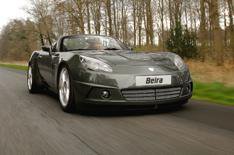 This is the Breckland Beira, a British-built 399bhp supercar that is expected to cost around 55,000.

The car is a two-seat roadster based on the General Motors Kappa platform, which is used for American cars such as the Pontiac Solstice and Saturn Sky.

It is powered by GM's 6.0-litre V8 engine, normally found in Corvette and Pontiac GTO models, which has been tuned to give 399bhp. The Beira has a six-speed manual gearbox.

Weighing 1400kg, the Beira's power-to-weight ratio means the car can travel from 0-62mph in less than five seconds and has a restricted top speed of 155mph.

The engine is able to run on petrol or Liquified Petroleum Gas (LPG), which can reduce emissions and running costs. The LPG tank can hold up to 70 litres, while the petrol tank has a 60-litre capacity, giving the car a potential range of 700 miles.

'Beira carries on from where Marcos and TVR left off in terms of providing maximum performance for your money and real individuality,' said Breckland director Mike Rawlings.

The Beira will go on sale this November, but will be unveiled at the London Motorexpo on June 9.