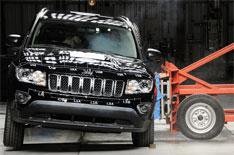 Crash test results for the Honda Civic and Jeep Compass have been released by safety body Euro NCAP.

It was also given a Euro NCAP Advanced award for its Collision Mitigation Braking Assist system a 1900 option with adaptive cruise control on top-spec EX GT models.

The Jeep Compass scored just two stars overall, with poor crash performance in the side pole test highlighted despite being fitted with the standard thorax airbag. It scored just 23% on pedestrian safety, with the bonnet generally providing poor protection where an adults head might strike.

New test rules for 2012 mean cars have to score at least 80% in adult protection, 75% for child protection, and 60% for both pedestrian and safety assist to get five stars.