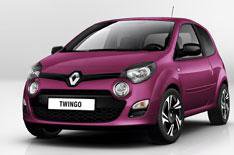 This is the new Renault Twingo, which is set to be unveiled at the Frankfurt motor show in September, before it goes on sale in early 2012.

The updated Twingo has a new look, with fresh headlights, grille and front bumper. At the rear theres a redesigned bumper, tailgate and lights. There are new colours and alloy wheel designs, too.

The Twingos new-look front end features an enlarged Renault logo, sitting in the middle of a narrow grille that flows directly into the headlights. Renault says the Twingo is the first production vehicle to be inspired by its new design identity, which has been previewed by concept cars like the DeZir supercar, Frendzy MPV, Captur crossover and R-Space MPV

A Renault source told us that no interior or engine changes are expected. Prices havent been confirmed, but Renault has recently dropped prices for some of its models and its possible that the Twingo could follow suit.