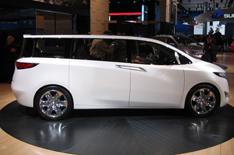 Is this a pure concept car, or is it the first indication of how a new Serena MPV could look if it was put on sale in Europe around 2010?

As far as Nissan is concerned, it's no more than a design study but then they would say that. After all, there's few who doubt that Nissan is investigating new styles for an MPV.

Striking features incorporated in the Forum include wide-opening, sliding side doors, and front doors that open by up to 90 degrees.

In addition, the second row of seats swivels round so that occupants can enjoy the built-in entertainment and communications systems face-to-face.

There's no misbehaving in the back, though: chief among the more bizarre gadgets are rear-seat camera monitors that allows adults to keep an eye on the children, and a microphone broadcasting system that allows the driver to make announcements through the car's speakers.

No engine details have been released.