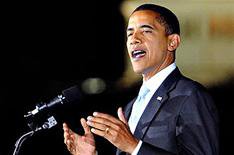 President Obama has sent shockwaves throughout the global car industry by ordering legislation to slash emissions and drastically improve fuel economy in new cars sold in the US.

The move is a sharp reversal of the Bush administration's policy on greenhouse gasses and fuel economy.

Obama said the orders were intended 'to ensure that the fuel-efficient cars of tomorrow were built in America'.

The US Transportation Department has been ordered to implement 2007 legislation requiring a 40% improvement in petrol mileage for cars and light trucks by 2020. The Bush administration had previously failed to write any legislation to enforce the law.

While the move has been greeted by environmental groups, the news will do little to allay the fears and financial troubles of the US and global motor industries.

Development costs, along with the added financial burden of retooling, could spell more financial gloom for US companies and foreign manufacturers that target US buyers. American car companies have lobbied hard against the introduction of the new law.

President Obama said that his administration would take heed of the motor industry's financial troubles. He said: Our goal is not to further burden the struggling American auto industry.'

Pressure could also mount on other nations to follow suit and order dramatic cuts in domestic emissions and improvements in fuel consumption of the nation's cars.