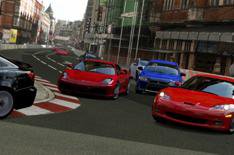 Computer opponents follow the racing line in a parade, pretty much. They'll dutifully and predictably turn in for a corner at the right time and speed even if it means a collision with you. Who would do that in the real world (a few notable F1 drivers, aside)?

There just isn't enough of the aggression, randomness or jostling for position that you'll find in many other games such as Forza, so it too often feels like you're racing robots.

Online you can take on up to 16 other players from around the world. The online feature went live at 8am. Come back to whatcar.com later today and we'll let you know what it's like to race real people.

Top tip from the Stig
One of the circuits included in GT5 is the Top Gear test track. Well, we've just spoken to the man formerly-known-as the Stig - Ben Collins. We asked Ben for his top tip on how to trim a little time from the lap... 'cut the Hammerhead Chicane', he told us. Give it a go.