More for you |
All the electric cars coming soonHow to spec a Jaguar XEShould I still buy my new electric car? 2021 Suzuki Across large SUV revealed: price, specs and release dateBest used family SUVs for less than £15,000
Home
News
One in 200 chance of dying on the road
news

One in 200 chance of dying on the road 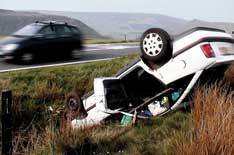 Britons have a one in 200 chance of being killed in a road crash, according to a Department for Transport (DfT) report that reveals how the death rate has improved only marginally in the past decade.

The calculation of lifetime risk for different modes of transport exposes how dangerous the roads are compared with travel by rail or air.

Details of the report were meant to remain unpublished, but were obtained and published by The Times newspaper.

Britain had the best road safety record of any European country in 2000, but since then has been overtaken by the Netherlands, Sweden and Norway, all of which have lower death rates per 100,000 residents.

The DfT report also reveals that motorcyclists are 45 times more likely to be killed per journey than car users.

Cyclists are four times more likely than car drivers to be killed, but pedestrians have almost the same risk as car users per trip.