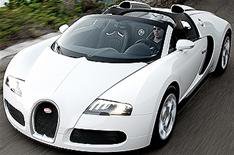 Anyone rushing to lay down a deposit for the 1.2 million Aston Martin that we revealed last week had better hang on because now we can bring you the story of the 1.14 million Bugatti.

Bugatti has confirmed it will build just 150 Veyron Grand Sports cars an open-topped version of the iconic Veyron.

Although the bodywork has been changed to ensure the car remains stable at high speeds and wind intrusion into the cabin is kept to a minimum, it will retain much of the hard-topped car's eye-watering performance capabilities because it will use the same 987bhp engine.

Top speed with the roof in place will be 253mph, with it off, 217mph, and with the emergency soft top in place, 80mph.

The Grand Sports is also expected to be heavier than the standard Veyron, because it has been significantly strengthened to compensate for the loss of the roof.

Oh, and if you are thinking of buying one, that 1.14 million price is pre-tax, and around 150,000 more than the sold-out standard Veyron.

The first 40 cars are reserved for existing Bugatti customers, and deliveries are expected to begin in March 2009.