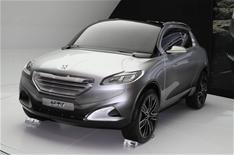 Our sources suggest that the 208 which will replace the 207 in summer 2012 is likely to have 1.0- and 1.2-litre three-cylinder engines. These should reduce fuel consumption and CO2 emissions compared with the 207s range of four-cylinder engines.

Power outputs and transmission options havent been confirmed, and its unclear whether the new engines will have stop-start systems as standard.

Rumours suggest the 208 could be smaller than the 207 it replaces. Peugeot is also hoping to make the new car lighter than its predecessor, which will further boost efficiency.

Peugeot has hinted that the 208's styling will be influenced by the SR1 and HR1 (pictured) concept cars, which were revealed during 2010. A 208 GTI is also expected its likely to use the 197bhp 1.6 THP engine from the RCZ coupe.