More for you |
What Car? Real Range: which electric car can go farthest in the real world?2020 Hyundai i20 small car revealed: price, specs and release dateRanked: The most reliable executive cars - and the leastFord Focus ST long-term test reviewCar recalls: what are they and what to do if your car is recalled
Home
News
Peugeot reveals '5' concept car
news 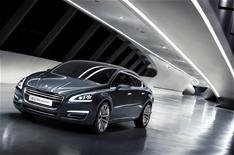 Peugeot has given the first indication of the car that will replace its 407 family car by unveiling the '5 by Peugeot' concept car.

To be shown at next month's Geneva Motor Show, the saloon will feature alongside the SR1 concept car that was announced in January and whose styling the new concept echoes, particularly at the front.

The 5's LED headlamps are highlighted by illuminated surrounds, and frame a unique grille, with the new Peugeot badge sitting in a specially shaped area at the front of the aluminium bonnet. The sides of the car feature brushed-aluminium window surrounds and door handles, while the distinctive rear lights are made up of three separate parts.

Longer than a Mondeo
At 4860mm long and 1420mm high, the sleek and elegant new concept is slightly longer than the Ford Mondeo and Vauxhall Inisgnia that it will rival, but not as tall. Peugeot says it is a 'very good indication' of what the 407 replacement will look like, and that the five-seater promises 'exceptional interior space, convenience and comfort'.

we expect to see something much closer to the actual 407 replacement at the Paris Show in October. In keeping with Peugeot's recent practice, this is expected to be called Prologue and will effectively be the production car, which is expected to called the 508 when it goes on sale next year.

Also in keeping with recent Peugeot show cars, the new concept features the company's Hybrid4 technology, which will be launched in the 3008 crossover next year.

In the new concept, this combines a 163bhp 2.0-litre diesel engine that drives the front wheels with a 37bhp electric motor at the rear. This allows the car to run purely on electric power at low speeds, with no emissions, as well as giving four-wheel drive when necessary. It also means low average fuel consumption of 74.3mpg and CO2 emissions of just 99g/km.