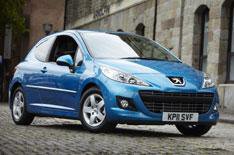 Peugeot has added new Sportium special-edition models to its range.

The 107 Sportium replaces the previous Envy model and is available with three doors or five. At 9945 for the three-door and 10,295 for the five-door, there's a 750 premium over the 107 Urban models they're based on.

The 207 Sportium is available as a three- or five-door hatchback, with a choice of four engines. It uses Active trim as a basis, but for an extra 350 adds a Clarion multimedia navigation unit, with a 6.2-inch touch-screen, built-in Bluetooth and USB compatibility. The system is also capable of DVD and video playback when the car is stationary.