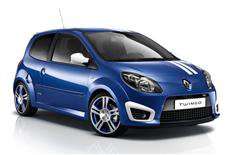 The Renault Twingo Gordini will cost from 14,500 when it goes on sale next month.

That's 1700 more than the Twingo Renaultsport 133 the car on which it's based.

The Twingo Gordini comes in Malta Blue or Pearl Black both with twin white stripes over the bonnet and roof. Unlike the stripped-out Gordinis of old, it has loads of equipment as standard.

The Gordini can also be specified with the Cup chassis, which has a lower ride height and stiffer suspension, for an extra 665.

The first deliveries are due in June.