More for you |
Every 5-star car on What Car?Used test: Maserati Levante vs Porsche MacanNew issue of What Car? magazine on sale nowMost and least reliable small SUVsRevealed: the car makers whose discounts have got bigger since lockdown
Home
News
Seatbelt safety
news 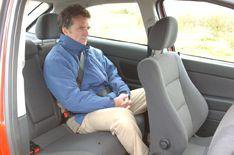 Ive noticed that many new cars are fitted with a three-point seatbelt in the middle of the rear seat, rather than the old-style lap belts. Im thinking of changing cars and plan to carry three people in the back, so wondered if this type of seatbelt is something I should be considering?
Dave Ramsey

As far as the law stands, both types of belt are legal. However, from April 2002 all newly designed cars have to use three-point belts throughout, and from October 1, 2004 all cars sold in the UK must be fitted with three-point belts.

A lapbelt is better than nothing, but a three-point belt will provide a higher level of protection to the occupant in an accident. Three-point belts perform better because, during an accident, the wearers shoulder, chest and abdomen will take the force of the impact. With a lap belt, the abdomen takes all the force. Head injuries are also less likely if the upper body is restrained.