More for you |
The best deals on our most in-demand carsThe best new car leasing deals on seven-seatersThe secrets of washing your car to perfection2021 BMW iX3 electric SUV revealed: price, specs and release dateShould I ditch my diesel-engined Porsche?
Home
News
Storing up trouble?
news 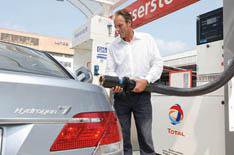 In their defence, those in favour of hydrogen point to the fact that it can be produced using many sources of power, including wind and solar power, so that it may be possible to produce it in the future without creating any further pollution.

Nevertheless, that does nothing to solve the further problems of storing and distributing the fuel.

Hydrogen has to be stored in a special tank, and there would need to be huge investment to create the infrastructure of filling stations that would be necessary for hydrogen-powered motoring to become a reality.

Hydrogen cars already being built
Despite all these problems, some manufacturers are working on hydrogen-powered cars, and one of the most prominent is BMW.

As long ago as 2007, BMW made a dual-fuel 7 Series that would run on either hydrogen or petrol.

The most famous current example of a fuel-cell car is the Honda FCX Clarity, which went into production in 2008.

However, this is not available to buy, and is only being leased to customers in Japan and the USA where the necessary fuelling infrastructure is in place.

Mazda, too, is heavily involved in hydrogen-powered cars, and it has provided several examples to the Norwegian HyNOr experiment, which is trying to create a so-called Hydrogen Highway between Oslo and Stavanger.

For now, though, the inevitable conclusion is that the prospect of everyday motoring in a hydrogen-powered car remains some way off.

For proof, look no further than Honda. Even when it announced the start of production of the FCX, the company said that its focus in the short term was to continue the development of its petrol-hybrid vehicles.