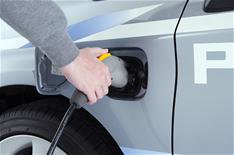 Toyota is showing off a few cars that are making their first appearance in Europe.

Toyota at the Geneva motor show on video

Plug-in Prius
This is a production-ready plug-in Prius that, unlike the standard hybrid, will be capable of running solely on electric power, with the petrol engine cutting in only when the battery power runs out.

The plug-in Prius can then be operated as a normal hybrid, where the battery can be recharged while on the move and work in tandem with the petrol engine.

Another advantage of the plug-in Prius is that it can be charged directly from a domestic plug socket. The battery pack can be charged in around 90 minutes.

With its increased electric-only range, the Prius Plug-in will significantly reduce fuel consumption and emissions over the current vehicle it will emit just 59g/km of CO2.

The company announced last December that UK trials of the car will begin this summer.

UK-bound cars will be leased to Government ministries, local authorities and other bodies such as electricity companies, universities and research agencies. The data from these organisations will be collected and used in the development of a national charging infrastructure.

FT-86
Toyota will be back in the coupe business towards the end of 2011 with a car based on the FT-86 concept car that was on show at the Tokyo motor show.

It was jointly developed with Subaru, which is partly owned by Toyota. A Subaru version is also expected, though it has yet to be announced.

Subaru will build the car for Toyota using one of its flat-four 'boxer' engines most likely the new fuel-efficient 2.0-litre direct-injection turbo unit.

The FT-86 is compact at a little over four metres long and is said to be light. In contrast with all other Toyotas on sale in the UK, it will be rear-wheel drive, but there will be room to seat four.

The '86' part of the concept car's name has legendary status in Japan, similar to RS or GTI in the UK. It was the badge given to the car that was known as the Corolla GT over here, a model that is still revered in its homeland.

The Toyota FT-EVFT-EV
The FT-EV concept car hints at the technology that will be used when it puts an electric car into mass production in 2012.

It is built on the Toyota iQ's platform, and is designed for use by people with daily journeys of up to 50 miles. That range is expected to be the goal for the production car.

The exterior and interior of the iQ also show some of the technology the FT-EV will use to maximise its range, including the aerodynamic front end and the range monitor inside the car.