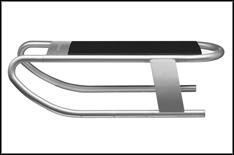 Porsche sledge
What do you expect from a Porsche sledge? Speed? Well considering the weight of this aluminium beast we reckon it would absolutely fly down the slopes.

We sent the sledge back just before the snow arrived, but we're confident you'll have no problems at all when it comes to being king of the slopes with this high-performance machine.

Oh, and it says Porsche on it. You'd expect that too, wouldn't you?
Price: 330
From: Porsche.com
Lego
From just a few pieces to kits with more than 1000 bricks and struts and gears to put together, Lego has a solution for all. The cheaper kits are obviously better for younger kids, but even young-at-heart adults can have fun with them and the bigger Ferrari and Lamborghini boxes. You want pneumatics, differentials and torque slip gears? You can have them and moving pistons in engines, with the bigger jobs such as the awesome crane truck.
Price: From 5.49 to 129.99 (various)
From: Lego.com
Meccano
Like the basic Lego kits, the small, simple Meccano cars are a great way to keep the little ones amused. Shell out for the more complex stuff and you could find yourself on the carpet in front of the fire until New Year's Eve trying to finish it off. Even the smaller 10 or 15 kits can come with instructions for multiple models.
Price: From 5.97 to 58.99 (various)
From: Amazon.co.uk
Scalextric
There are lots of different types of Scalextric to choose from, with the entry-level range featuring a simple track layout that's better suited to younger drivers. The standard tracks, with more different types of curves to choose from, are probably the stuff you're familiar with, but digital is where realistic racing begins. With this you can race up to six cars on one slot, changing lanes at specific points with the push of a button on your controller in a bid to overtake.
Price: From 59.99 to 299.99
From: Scalextric.com
Remote control cars
You can get cheap, simple remote control cars to run around the Christmas table once lunch is cleared away. Get a few and have a race around the crackers and coffee cups. Tamiya is the best known brand for decent electric performance with cars costing from around 80 for something like the Lunchbox. The rest of the gear controller, servos, receiver, battery and charger are widely available from model stores as starter packs for around 50. You're getting pretty serious when you step up to petrol-powered models. Prices start at around 170 for a Tomahawk BX, but get competitive and you could spend thousands.
Price: From 5 to 5000
From: Amazon.co.uk
Plastic model kits
Its always amusing to see someone glue their fingers together on Christmas day, so don't forget to add a plastic model to your list of gifts. Many cost from less than 10, while more detailed 1/12 scale models, with photo-etched parts, can cost more than 100. Remember to make sure that paint, tools and glue are all included in the pack.
Price: From 10 to 100
From: Airfix.com
Mini Electric Car
Mini has started trials of its electric car, but it's a little bigger than this six-volt toy. Officially licensed by BMW, the electric Mini is part of a whole range of electric cars and bikes available at Halfords. Top speeds of 100mph and a range of 60 miles could be a little optimistic.
Price: 119.99
From: Halfords.com
Laser Zero Gravity RC Car
If you're one of the few that aren't usually climbing the walls on Christmas day but fancy giving it a go, try one of these gravity-defying RC cars. A fan sucks the car onto the wall, or ceiling, and chases the red dot you beam in front of it with your laser. Laser beams what could be better?
Price: Price 39.99
From: Iwantoneofthose.com
Porsche 356 Ride-on Electric Car
Young Porsche fans can get behind the wheel to celebrate the companys heritage with a 356 Ride-on Electric Car. Emulating the iconic style of this classic model, the 356 is suitable for children aged between three and five. Sadly for dads, you won't fit we've tried.
Price: 288
From: Porsche.com