* Orders not being supplied in full * Priority given to established winter tyre markets * Drivers warned to expect delays of weeks... 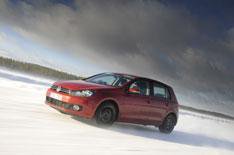 A shortage of winter tyres could hit UK drivers, according to the industry's distribution association.

Tyre retailers have told the National Tyre Distributers Association (NTDA) that orders are not being delivered in full leading to fears that many drivers will miss out as they prepare for harsh winter weather.

Richard Eyre of the NTDA said: If retailers had ordered 100,000 tyres, then they were only getting 75,000 delivered.

He warned drivers to expect days of several weeks even if they had ordered in advance.

The NTDA expects the wait to be longest for motorists who require performance tyre sizes, because manufacturers are giving priority to established markets such as that in Germany

Kwik Fit confirmed that it had been let down on at least one size of tyre; the popular 195-45-R16 that's fitted on the Ford Fiesta among others. The tyre retailer said it was unable to say when stock would become available.

The NTDA believes it will take another couple of years for the UK to become an established winter tyre market.