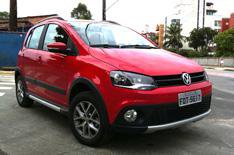 Volkswagen has been building cars in Brazil since 1957 and it's the largest car maker in the country.

The Brazilian climate, economy, roads and tax system are very different to the UK's, which means the cars it builds and sells there are equally dissimilar.

We took to the roads around Sao Paulo, and drove some of VW Brazil's best-selling models to find out how they compare with those in its UK range.

Volkswagen Gol
The Gol which translates as goal has been Brazil's best-selling car for 25 years, so you could think of it as the Brazilian Golf. Despite the similar names, these two cars are completely unrelated. In fact, the Gol is based on the same platform as the previous-generation European Polo, so we'd label it a supermini.

We drove a 1.0 Bluemotion model, which has a 99bhp 1.0-litre four-cylinder engine, which, like most new Brazilian cars, can run on either ethanol or petrol. Both are sold at the fuel pumps and locals decide which to use depending on the current price.

Performance is leisurely, but once up to speed the Gol cruises happily enough. It's surprisingly quiet, too. The Gol's ride is firm, but it doesn't get upset by bumps. Brazilian roads vary wildly in quality and many are no more than dirt roads. As a result, their cars have a ride height that's around 5cm higher than that of a typical car in the UK.

Compared with a European Polo, the Gol's cabin looks very plain and there are no soft-touch plastics in sight. Build quality is excellent, however, and the heating and stereo controls on top-spec models aren't that different to those in UK VW models.

Volkswagen Kombi
Believe it or not, the Kombi (often referred to as the VW Camper or Transporter in the UK) is still built in Brazil. Although it now has a large plastic front grille and a modern 1.4-litre water-cooled engine, it has changed little from the first model that rolled off a Brazilian production line in 1957.

The VW Kombi has been built in Brazil since 1957; production is due to end in late 2013

Here, the Kombi is a working vehicle, and commercial versions have a one-ton payload. The model we drove had a nine-seat minibus layout and, like every other Kombi we saw, it was finished in plain white.

Driving the Kombi is like going back in time. The driving position is, by modern standards, terrible; the steering wheel is huge and near-horizontal, while the cabin layout and quality is utilitarian in the extreme. On the move, things feel similarly antiquated, with vague steering and an obstructive gearshift.

The Kombi is dated, but its simplicity and low price (not to mention its iconic looks) means that it still sells well in the South American market.

VW currently builds 2500 a month, but production will stop in late 2013, due to new safety regulations that the Kombi can't be modified to meet. It's unlikely that its replacement will be around for as long or have as much charm.

Volkswagen Crossfox
The Crossfox is an SUV-style version of VW Brazil's Fox city car. If it looks familiar that's because VW sold the standard version of the Fox in the UK, in three-door form, between 2006 and 2011. Its replacement, the VW Up, is our current Car of the Year.

A 2010 makeover gave Brazilian Fox models a new front end that's very similar to the UK Polo's. The Crossfox has extra cladding and decals, different bumpers and a raised ride height to give it a more rugged look.

Inside, the Fox's face-lift included a new interior which, apart from the hard plastics, wouldn't look out of place in some of VW's UK models.

The Crossfox is good to drive too, with a more forgiving ride than the Gol's. Refinement is impressive, too, and the 1.6-litre version we drove had a decent turn of pace.

We've got a feeling that the Crossfox could be a viable rival to cars such as the Dacia Duster, Nissan Juke and Skoda Yeti in the UK, but a new small SUV based on the Taigun SUV concept car unveiled at the 2012 Sao Paulo motor show is likely to go on sale in around two years.