More for you |
New issue of What Car? magazine on sale nowPromoted | 5 reasons why it makes sense to go electric todayBig savings on our Car of the Year Awards winnersWhat Car? Awards 2021: The best cars you can buy2021 Nissan Qashqai: electric and hybrid power revealed
Home
News
Volkswagen Giugiaro Concepts
news 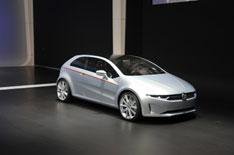 Volkswagen is showing two concept cars here at Geneva, and both have been developed by Italdesign Giugiaro the famous Italian design house that was recently taken over by the VW Group.

The Tex
First up is an angular Polo coupe concept called the Tex, which Giugario says is an 'interpretation of tomorrow's sporty Volkswagen'. At just under three metres long, the Tex concept is a plug-in hybrid, which has a range of around 20 miles on electric power alone.

Go!
The other Giugiaro concept is a new small MPV called the Go!, which shares a similar front end with the Tex, but has a profile much more in keeping with a traditional mini MPV.

At just under four metres long, the Go! is capable of running of battery power alone for up to 150 miles. No more information other than that has been revealed about the electric motor or the drivetrain, but VW has said the battery packs are located in both the front and rear of the car, to give near-perfect weight distribution.