More for you |
What Car? Real Range: which electric car can go farthest in the real world?2020 Hyundai i20 small car revealed: price, specs and release dateRanked: The most reliable executive cars - and the leastFord Focus ST long-term test reviewCar recalls: what are they and what to do if your car is recalled
Home
News
Volkswagen's tiny electric taxi concept
news

* Three-seater car is based on the Up * Battery-powered range of up to 186 miles * Up city car arrives next year... 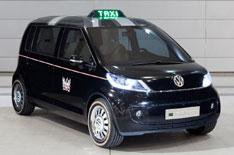 Volkswagen has unveiled a battery-powered three-seater taxi concept based on its Up city car.

The World Taxi concept car is shorter than the Fox currently VW's smallest model but is cleverly packaged to provide as much space inside as possible.

Although it carries only two passengers, there's plenty of legroom and the taxi can also carry several suitcases.

The 113bhp electric motor gives a top speed of 74mph, and Volkswagen says the 45kWh battery provides a range of up to 186 miles. It takes just over an hour to charge the battery to 80% of its capacity.

'A wide sliding side door gives easy access to the rear of the cabin where the passenger seats are, while the luggage sits up front next to the driver as in the old-style black cabs (as seen in the Ladykillers).

Since the concept is a left-hand drive vehicle, the sliding side door is on the right-hand side. That's great on the continent, but would most often deposit passengers into the traffic in this country.

If the project gets the go ahead, head of VW design Klaus Bischoff promises that the door will move to the left hand side of the car for the UK.'

VW's taxi was unveiled in London on the same day that Boris Johnson put forward proposals on how to tackle black-cab emissions and improve air quality in the capital.

While there are no plans to put the taxi into production just yet, environmental pressure from legislators such as the London Mayor will only improve its chances of being built.

The Up city car is definitely on the way, however. A two-door version will go on sale late next year, followed by a four-door model soon after.