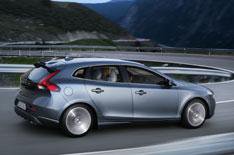 Volvo should consider working with parent company Geely on its next generation of small car platforms, according to the brand's new president and ceo.

The manufacturer is developing a new Scalable Platform Architecture (SPA), a kit of chassis parts that will underpin all of its future large models from the S60 upwards. It will be based solely around turbocharged four-cylinder engines at launch, and will make its full debut on the next-generation XC90, which is due before the end of 2014.

However, senior Volvo sources say that the SPA technology is not presently designed to scale down to a car as small as the Golf-rivalling V40 and while that model is barely a year old, the lengthy development process means that a partner may need to be found to help with its successor.

Volvo's new boss, Hakan Samuelsson, argues that instead of joining forces with another mainstream manufacturer, his engineers could share costs and resources to come up with a small-car chassis that could also suit Geely the Chinese company that owns Volvo.

'We have a very open and constructive relationship with Geely,' said Samuelsson, 'and I think we should certainly explore what we can do together in this area. That could be a case of us developing the chassis to joint requirements, or engineers just working together. One thing is clear: it's much easier to accommodate the requirements of both companies when you work alongside each other from the start.

'I really think this could be worth exploring, instead of a traditional partnership. We have a history of those here at Volvo [the company has previously shared parts with Ford and Renault] and they have not been entirely successful in the long term.'

The SPA parts that will underpin the new XC90 could also spawn a new 2+2 coupe; the senior management showed a profile picture at a presentation in Gothenburg and insiders admit that a concept car is being prepared. 'We wouldn't even be considering producing a concept like that if we didn't have the chassis technology that could support it,' said one source.

The next XC90 will have four-cylinder engines (petrol and diesel) and a choice of six-speed manual or eight-speed automatic transmissions. Its range-topping model will blend the four-cylinder turbocharged engine with an electric motor to produce around 395bhp and 435lb ft of torque.