More for you |
Car dealerships in England are openAlfa Romeo, Fiat and Jeep offer customers free 12-month job loss protectionThe best cars in the history of What Car?Confessions of a car salesmanScrappage scheme: latest deals and offers
Home
News
Want one?
news 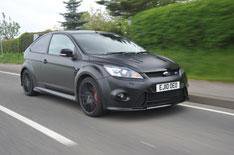 Ah bad news on that front. The UK's allocation of 101 cars sold within hours of the RS500 being announced. Eager buyers were begging dealers to take their deposits before Ford had even decided on a price.

So, unless you're one of the lucky few customers with your name already on the list, you won't be able to buy a new one.

However, a few customers have paid their deposit simply to make a quick buck. If you're desperate to get your hands on an RS500, you can probably buy your way onto the waiting list but expect to pay well over Ford's asking price. We've already spotted one in the classifieds for an eye-watering 40,500.

Frankly, we wouldn't bother. We'd stick with the standard Focus RS at 27,895 a bargain by comparison. It'll do 95% of what the RS500 will and is just a much fun. You'll need to be quick, though, because only around 300 of those are left.

For more information on the RS500, check out Ford's dedicated website - www.focusrs500.com.

On sale Sold out
Price from 35,650
You'll like Brutal performance; evil looks; instant classic status
You won't All 101 UK cars have been sold