What is the best smartphone holder for your car?

We've tested the most popular smartphone holders to find out which is the best for your car... 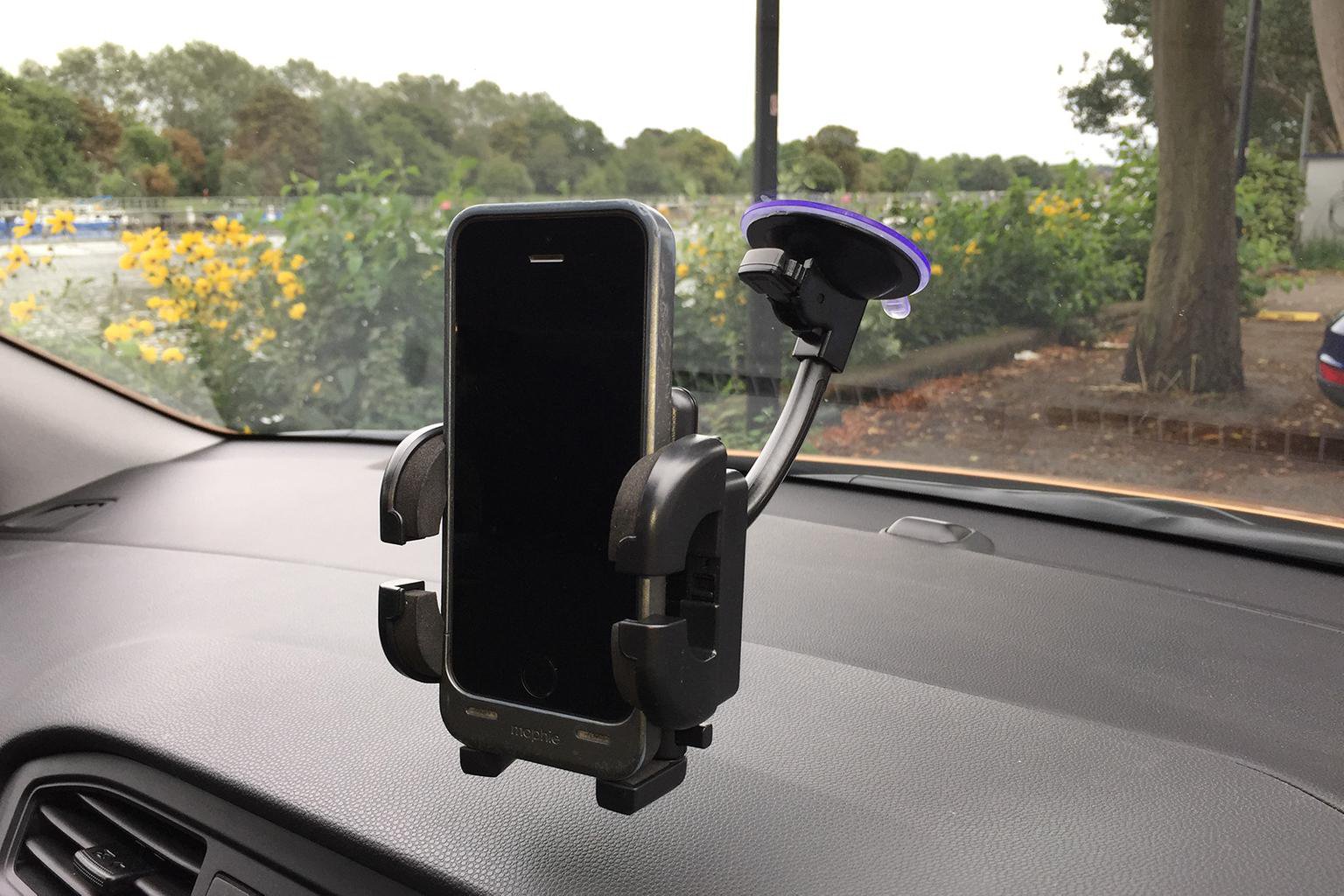 If you're looking for a smartphone holder, we recommend choosing the Halfords Suction Mount PDA Holder. After testing a variety of smartphone holders in a number of different cars, it became clear that the PDA holder works well and crucially stays secure underway, which not all tested managed.

Why did we test smartphone holders?

As we become ever more reliant on our phones in our daily lives, their use is spreading into our cars. We're not talking about breaking the law by using them to make and receive calls without a handsfree kit, we're talking about car manufacturers embracing the smartphone as a way to entertain, educate and direct the driver. This is only going to become even more prevalent with the arrival of Apple Carplay and Android Auto.

We decided to test a variety of the bestselling smartphone holders to find our favourite. We set a budget of £20 and selected five of the UK's bestsellers. We then tried out each of the smartphone holders back-to-back on the same roads in a number of different cars.

What makes a good smartphone holder?

A mobile phone holder has to be easy to attach, must stay put, needs to hold the phone securely and also has to dampen some vibration so that the phone is as easy to see and use as possible. On top of that, the holder mustn't damage the windscreen or dashboard. The Halfords PDA holder ticks all these boxes and is our pick.

The Halfords Suction Mount PDA Holder comes in a piece of cardboard attached with cable ties. It feels a bit budget but neither of the test ones that we received were damaged. The holder comes in two parts: the PDA holder and the extended mount that has the suction pad to attach it to the windscreen.

The suction mount is one of the best that we tested. There's a ratchet-type lever that you push towards the windscreen to seal and a switch that pulls the ratchet forward releasing the suction pad. The gooseneck holder is stiff but bendable and once in position stays there. You attach the mount to the holder by sliding it on and once there it feels secure. During our test, we didn't have to reattach the PDA holder once nor did we have to check that the suction pad was holding.

The phone holder itself has two arms and two feet that it uses to keep the smartphone secure. The two arms are cushioned to protect the phone while the feet flip out from the bottom to increase solidity. The arms also move up and down to create a larger area.

We had no problem fitting an iPhone 6 and the holder will fit devices from 4cm wide up to 11.5cm, allowing it to accommodate larger phones like the iPhone 6 plus and the Samsung Galaxy S6 making a universal smartphone holder.

One of the first things you notice is that it's not the most attractive bit of kit. The plastics are hard and feel cheap and the phone is removed by a button on the side of the mount that is a bit stiff. However on the whole the mount is strong, secure and allows the phone to be read and used easily. If you're willing to look beyond form, this is the best smartphone holder we tested and at £16.99 it offers decent value for money.

Our second choice is the Belkin Window Mount. It looks smarter than the PDA mount but we found that the lock needed adjusting on a regular basis. The basic idea is the same as our winner but it's constructed from more premium materials and features smart touches like a cable tie. It's got a similar bendable arm to our winner although it must be said that the Belkin is easier to move and damped some vibration, although it didn't feel as solid when we were prodding around on the touchscreen.

To lock the mount to the windscreen you twist the base to the locked position. During our testing, the base needed to be twisted a number of times after it had worked itself loose and slid around on the windscreen, however it never fell off.

The phone holder consists of clear plastic arms that hold the phone in place and bend backwards to allow the easy placing and release of the phone. It can't hold very large mobiles and we'd be concerned about using it with the phone in portrait mode in case the phone slid out.

It's £2 less than our winner and made from nicer materials but when it comes to doing the job, the Halfords PDA mount has it beat.

What about smartphone holders that don't attach to the windscreen?

The third choice and our favourite if you want to attach your phone to a vent rather than the windscreen is the Kenu Airframe (RRP £20 but available for £10.99 if you look around). It's considerably smaller than the top two but won't appeal to everyone because it doesn't fix to the windscreen and therefore requires a longer look away from the road if you're using it as a sat-nav alternative.

It feels very well made and is really easy to use. The front part which holds the phone is a rubberised holder with an arm that easily expands and contracts to fit smartphones with a screen up to 5 inches, any bigger and you want to buy the Airframe Plus which has an RRP of £30. The arm snaps back into place and to hold the phone.

On the back there is a four-prong clamp which is rubberised to minimise damage to air vents and rotates so the phone can be held in practically any rotation from portrait to landscape and anything in between.

The clamps have two setting one large and one small that allows fitting to nearly any type of airvent.

In practice it holds the phone well and is easy to transport. Why doesn't it win? It's expensive for what it is, it doesn't fit every car, it blocks the air vent and it requires you to look down for too long. If you change cars regularly, it's worth considering.

The Halfords Phone Holder is very similar to the winner in that it uses the same mount and suction pad. The difference is in the size and usability of the phone holder. It's considerably smaller than the PDA mount which limits its use to smaller phones and there isn't as much adjustment as the bigger one which means that the phone doesn't feel as secure. It's just £2 less than the winner and we'd suggest spending the extra money on the bigger one.

The last holder we tested is the Type S PDA phone holder and we'd struggle to recommend it.

Like the Kenu Airframe it's designed to clip onto an air vent. Unlike the Airframe it uses a metal clip which we couldn't get to attach to many car vents and those that we did we were worried it would cause damage to because it does without any plastic protection to stop scratches. It's biggest problem was that it really struggled to hold our test phones securely.

At less than £8, it's cheap but it also feels cheap. Online reviews are damning and we can see why. Considering you can get the Kenu Airframe for just a few pounds more if you shop around, we'd struggle to recommend the Type S PDA holder.

Overall our favourite smartphone holder is the Halfords Suction Mount PDA Holder. It's secure, easy to use and offers decent value for money which all add up to make it a great buy.