* Will be eight engines to choose from * Safer and cleaner options * More edgy look to new styling... 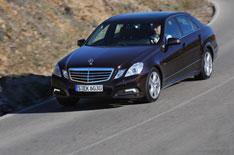 If buying patterns remain true to form, the E220 CDI and E250 CDI (replacing the former E280 CDI), will mop up around two-thirds of UK sales, so they're the ones we made a bee-line for at the driving exercise.

Of the two, we'd take the E220. You don't notice the 34bhp difference in power (170 versus 204), mainly because the E220's peak torque is available at lower revs and lasts longer. The less powerful engine is also smoother and not quite so gruff under heavy acceleration.

The E250's an impressive effort, all the same: 204bhp and average fuel economy of 53.3mpg seem barely credible from one car.

As we said at the start, there are a lot of contradictions about the new E-Class, though. It's innovative and conservative at the same time. What the engineers and designers have come up with is a car that's very good at being a Mercedes-Benz, not one pretending to be something else.

What Car? says
Benz doing what it does best but better.