Home
Advice
How to get car finance with bad credit
advice

How to get car finance with bad credit

It is more difficult to arrange car finance if you have a bad credit rating, but there are ways to do it. Here's how...

A poor credit history can seriously affect your chances of getting car finance.

Lenders are more likely to approve people with good, strong credit scores, because they’re deemed a safe bet for making repayments on time. The opposite applies to people with a bad credit history; finance companies are wary of anyone with a track record of failing to pay on time and therefore are less likely to offer competitive rates – and they may even completely refuse to offer a loan.

It's still possible to arrange car finance if you have a bad credit history, though, and there are things you can do to improve your chances of securing a loan.

Get a credit report

A credit report is a great place to start, because it will show you the details of your credit history, including your credit score. It will give you an idea of where you’re going wrong and what you can do to improve your chances of getting car finance.

You can access a copy of your credit report for free from Experian, Equifax or Callcredit. There are sometimes slight differences between the exact information they hold about you but, generally, the data is pretty similar.

Register on the electoral roll

If you haven’t already, make sure you register on the electoral roll. Finance companies look at this when they perform credit checks to see if your name and address match up.

If you’re registered on the electoral roll, it makes it easier for finance companies to carry out these checks. Being registered won’t transform your credit rating, but it does help and it’s easy to do. 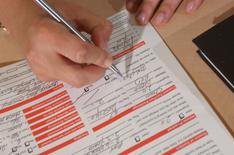 If your credit history means you can’t get a conventional form of car finance, such as personal contract purchase (PCP), you might be able to arrange a different form of loan.

Hire purchase (HP) might be an option, because the vehicle remains the property of the finance company during the loan. This means they can take the car away if you miss payments, but it’s a greater form of security for a lender.

You might also be able to arrange a guarantor loan, which means someone else – usually a relative or a friend – also signs up to the finance plan. If you miss payments, the other person will be liable and the finance company will seek the money from them.

Another way is a secured personal loan. You might arrange this via a bank, for example, and it would be issued against an asset that you own, such as your home. If you don’t keep up with the payments, the bank could take possession of your home or whatever other asset you use.

Non-status leasing is also an option. It's designed for people with bad credit, because the lender looks at your overall situation rather than just your credit history. Non-status leases are generally more expensive than other forms of finance, and you won’t own the car at the end of the contract.

Keep applications to a minimum

Generally, the more loan applications – or ‘hard searches’ as they can be known – you make, the greater the negative impact on your credit history, so it’s a good idea to make as few as possible.

Initially, an eligibility check, or ‘soft’ search, is a much better idea than a formal application. While it won’t tell you for certain if a finance company will offer you a loan, it will give you a good indication, and it won’t appear on your credit history.

Pay off your debts

It sounds obvious, but if you have a bad credit history, one of the best ways to improve it is to pay off as much or as many of your debts as you can. This won’t wipe out a bad history, but it will show lenders that you’ve made a positive effort.

Those with the best credit scores have a history of paying off their loans on time every time, so this is what you should aim for.

Cut ties with other people with bad credit

It might not necessarily be you who has a bad credit rating; it could be someone with whom you have a financial association, such as a joint bank account or mortgage, that is affecting your eligibility for car finance.

In a lot of cases, this can be unavoidable, but if something like a joint bank account is your only tie to that person and you no longer need it or could get by without it, formerly disassociating yourself might improve your credit rating.

The higher the deposit, the lower the amount of money the finance company has to lend you, which lowers their risk.

It’s incredibly simple, but if you can increase the size of your deposit, you may well be able to access a greater number of car finance options.

Next: what's the best time of the month to buy a new car? >