An expensive performance saloon lives and dies by the way it drives and, in this regard, we’d argue that the Giulia Quadrifoglio is one of the best performance cars you can currently buy.

Its 2.9-litre V6 petrol engine is an undeniable highlight of the Quadrifoglio experience; it delivers a razor-sharp accelerator response with hardly any lag, despite being heavily turbocharged. In fact, if you floor the accelerator from standstill it’ll not only out-sprint a Mercedes-AMG C63 to 62mph but it’ll also carry on to a higher top speed. The former is a fact backed up by our own independent tests, with the C63 managing a swift 0-60mph time of 4.1sec to the Quadrifoglio’s ludicrous 3.9sec.

Although the eight-speed automatic gearbox dithers and slurs a little at low speeds through town, it absolutely transforms once you start to press on, providing finger-click-fast manual changes when you use the tactile aluminium paddles that are mounted to the steering column. It’s certainly better than the sometimes hesitant nine-speed unit found in the C63.

The engine and gearbox are at their best when you’ve selected the sportiest Race driving mode; the Dynamic, Natural and Advanced Efficiency modes enable rather more relaxed accelerator response and gearchange settings. Race is also the mode in which the Giulia Quadrifoglio sounds its best, barking loudly as the revs rise and cracking violently when you change up through the gears. It sounds fantastic for sure but, many will argue, not as evocative as the C63’s thundering 4.0-litre V8. That’s especially true when you’re not hooning around, the Quadrifoglio sounds surprisingly like a three-cylinder city car when you’re tooling around gently in Natural mode.

If one aspect of the Quadrifoglio disappoints, it’s its brakes. There’s no problem with their stopping ability – the optional ceramic brakes in particular provide monumental retardation from high speed – but they could be richer in feel. Because the Giulia Quadrifoglio’s brakes are initiated via electronics rather than hydraulics, as you press the brake pedal the initial response is a tad vague unlike the C63’s more reassuring pedal.

There’s nothing wrong with the way the car handles, though. It feels light, poised and nimble when you turn in to a bend, and the quick steering is alert but never nervous. Its adaptive suspension can be made softer or stiffer to suit the bumpiness of the road independently of the drive mode selected, and its firmest setting all but eliminates body roll when cornering at speed. If you want the ultimate thrills, a C63 provides more detailed feedback through its steering wheel and is even more agile in the bends.

The Giulia Quadrifoglio also has a clever differential on its rear axle that helps prevent power being wasted through wheelspin. Of course, if you want to break traction at the rear and steer using the accelerator, that’s possible too – in doing so you’ll discover that, despite its enormous power output, the car’s chassis is forgiving once you get past an occasional hesitancy for the differential to lock up in low gears. This is no issue in the C63.

Then there’s the ride. If you think a performance car will be too firm, think again. Although you can feel how the Giulia Quadrifoglio's tyres follow road imperfections, that same adaptive suspension system that helps it stand bolt upright in corners can – at the flick of a switch – be made supple enough to take the sting out of sharp ridges and cushion you from rough sections of tarmac. In fact, the only thing to blot its copybook as a cruiser is a bit of wind and road noise at motorway speeds, but its rivals, particularly the C63, suffer from this rather more acutely while also proving less comfortable on long journeys. 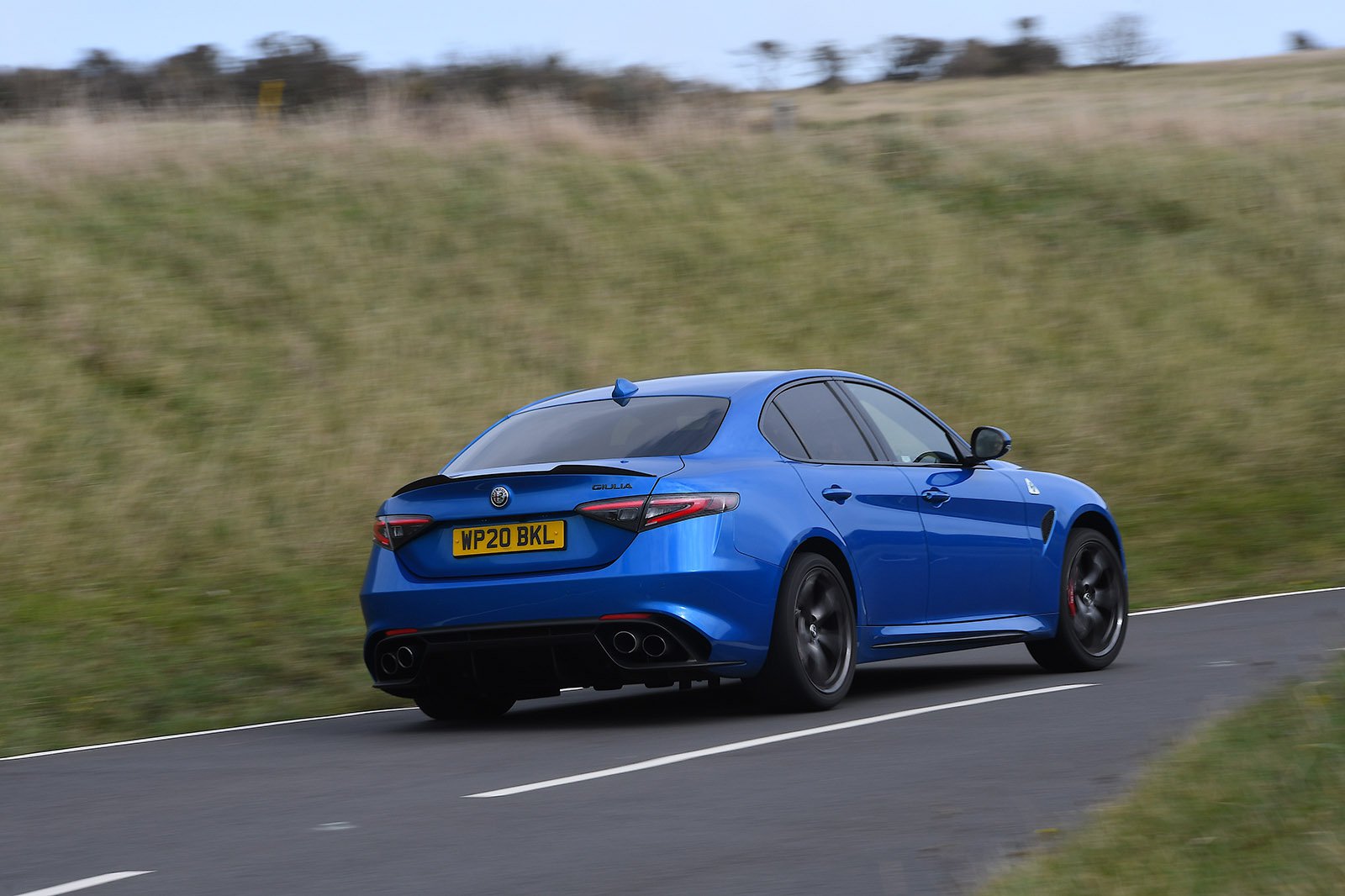