The 187bhp 520d is punchy enough and it's our pick of the range. If you don't believe us, check out its 0-62mph time of just 7.6sec, which is plenty for whisking you up to motorway speeds without any fuss. Performance is roughly on a par with the rival Mercedes E220d Estate's, although in terms of real-world drivability (as opposed to outright acceleration), the Audi A6 Avant 40 TDI has a slightly wider performance window. It's fractionally more flexible as a result.

If you want more grunt, then the brawnier six-cylinder 282bhp 530d Touring has it in spades. It’s effortlessly quick (0-62mph in 5.6sec) and, in everyday driving, just as rapid as the more powerful 540i petrol. That, by the way, is the most powerful 5 Series Touring you can buy and is brilliant to drive. It offers scintillating pace that gets you to 62mph in a whisker over five seconds, but it's a bit pricey to run. The only other petrol in the range, the 520i, is the least recommendable of the engines – it needs revving hard to achieve its best, and that's not ideal in a load-lugging estate car.

But what if you want to avoid diesel yet desire efficiency? That's where the plug-in hybrid 530e comes in. It's a punchy performer offering a combined 288bhp from its four-cylinder petrol engine and electric motor, which is enough for 0-62mph in 6.1sec. On top of that, the electric-only range is up to 35 miles and, while it's a lot less rapid running on the electric motor alone, it'll still power you up to motorway speeds relatively easily.

M Sport trim comes with suspension that's quite stiff for what's supposed to be a luxury car. This affects the ride on any surface, but most noticeably with a thud over sharper bumps in town. The added firmness is less apparent on a motorways unless you hit a ridge in the road.

The optional adaptive suspension cures the firmness, but it's part of the pricey M Sport Pro Pack and doesn’t include the 520i or 520d models. 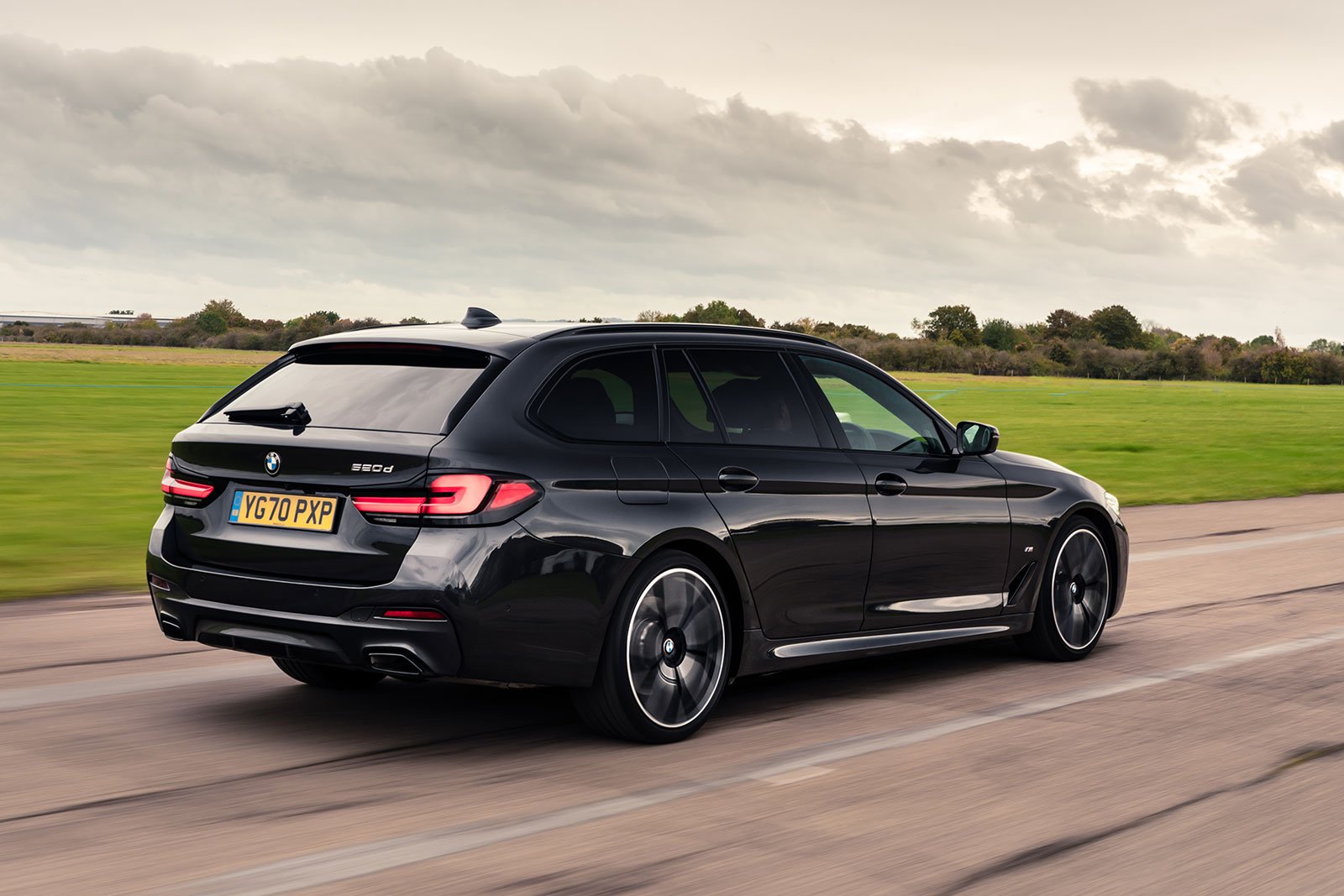 Unlike BMW's traditional strapline, we'll stop short of classing the current 5 Series Touring as 'the ultimate driving machine', but it certainly snaps at the class champion's heels. That's the Jaguar XF Sportbrake, by the way, which has delicate and informative steering that the 5 Series can't quite match. The 5 Series' steering is accurate and nicely weighted, though, and more intuitive than the Audi A6 Avant's or the Volvo V90's.

The 5 Series Touring doesn't have quite as much front-end grip as its key rivals. But drive it at eight-tenths – exploiting its sublime rear-wheel-drive balance, rather than leaning too heavily on its front tyres – and there’s still plenty to savour about pedalling it down a snaking A-road. As you might imagine, going for the xDrive version (four-wheel drive) improves traction considerably in the wet.

The 5 Series Touring does a brilliant job of keeping wind and road noise at bay, even at high speeds; it's designed very much with fast German autobahns in mind, after all. For library-quiet cruising manners, though, avoid the 19in and 20in wheels fitted with run-flat tyres that produce more drone and slap over expansion joints.

As far as engine noise goes, the six-cylinder 540i petrol sounds deliciously smooth and sweet even when you hoof it. The six-cylinder 530d produces some vibrations through the steering wheel at times and growls more than the E400d, but it's a pleasingly purposeful growl. Our favourite engine, the 520d, is hushed at 70mph but isn't as smooth as the A6 Avant 40 TDI's diesel engine when accelerating. If you go for the 520i or 530e, both of which use a four-cylinder petrol engine, it's smooth and quiet. The 530e swaps between petrol and electric power seamlessly and it's super quiet in electric-only mode.

All versions come with a superb eight-speed automatic gearbox, which is never anything but ultra-slick through its gears.