The 5 Series Touring is a big car in the front. Leg room is on a par with the Mercedes-Benz E-Class Estate and there's a touch more than you'll find in the Audi A6 Avant. There's plenty of head room, too, so even adding the space-zapping optional panoramic roof doesn't make it cramped for six-footers. And it's one of the widest estate cars in the front, which is why it feels airier and less 'fitted' than the more intimate interior of the E-Class.

There's loads of storage space on top of the passenger space. The glovebox is a good size, there’s a lidded cubby behind the gear selector, two generously sized cup holders and big door pockets that'll accommodate a small water bottle each.

If you want the roomiest rear seats in your posh estate, then hands down the Volvo V90 is a better bet than the 5 Series Touring. That said, both head and leg room in the 5 Series are good enough for six-foot adults to sit behind similar-sized folks up front. Indeed, it has a touch more knee room and lots more foot space under its front seats than the E-Class Estate.

That makes the 5 Series Touring a more relaxing place for rear-seat passengers to chill out if they're in the two outer seats. There’s a tall central tunnel along the centre of the floor that the middle passenger has to clamber over and straddle, and, if you’re trying to fit three burly fellas side by side, shoulder room will be tight. That said, it’s the same story in any of its rivals. 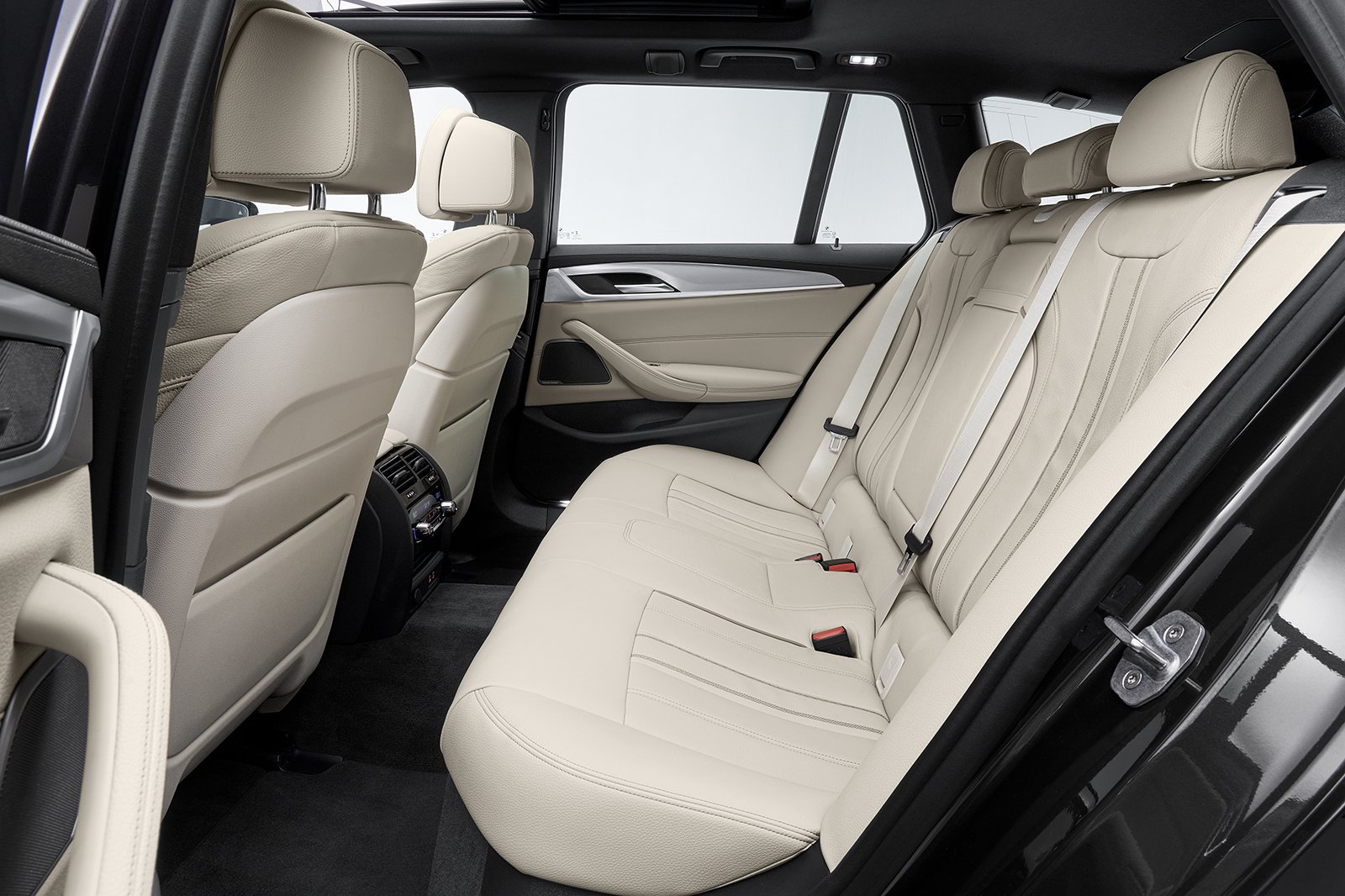 The 5 Series Touring has a good, square-shaped boot and, with its 560-litre capacity (with the rear seats in place), it’s marginally larger than the A6 Avant's and V90's. There’s also a bit of extra luggage space under the boot floor; enough for shallower items such as laptop bags. Even so, it’s still a bit smaller than ‘the king of boots’ that is the E-Class Estate. To prove that particular point, the 5 Series Touring's boot can take eight carry-on cases under the tonneau cover, while the E-Class trumps that with nine.

With the rear seats folded down, you get a long, flat load bay all the way through to the front seats, and the boot floor comes flush to the tailgate opening, so there’s no lip to lift heavy items over. It has some neat features, too; the standard powered tailgate automatically retracts the tonneau cover as it lifts, and if you’ve backed up so close to a wall that you can’t open the whole tailgate, you can still gain access to the boot by popping open the rear window, which is hinged separately.

The 530e has a smaller boot because the battery sits under the boot floor. A with the capacity reduced to 430-litres, we're talking quite a chunk of useable volume.