Getting comfortable behind the wheel of the Jaguar F-Pace is a breeze. Even the entry-level trim comes with an eight-way, part-electrically adjustable front seat (with adjustable lumbar support). Stepping up to S trim gains you 12-way electric adjustment, while SE and HSE trim come with 16-way memory seats and an electrically adjustable steering column (it's manually adjustable on lesser trims but still has a great range of movement).

There are figure-hugging ‘Sports Seats’ in the R-Dynamic models. Despite being bucket-shaped they’re surprisingly comfortable and hold you firmly in place around tight bends.

An entry-level F-Pace comes with clear analogue dials but the SE trim (and above) benefits from Jaguar’s Interactive Driver Display. It simulates analogue dials on a 12.3in screen, but you can swap them for more pertinent information, such as a full-screen navigation map. To be honest, the digital screen is so easy to read that it makes the optional head-up display worthwhile rather than an absolute must. The rest of the controls are well laid out and easy to use, with more physical buttons that are simple to use than you get in the Volvo XC60.

You might imagine that its swooping styling would make seeing out of the F-Pace quite tricky. Thankfully, the view forwards is pretty good and you sit relatively high up – just not as high as you do in the tallest cars in the class, such as the Land Rover Defender.

Over-the-shoulder visibility is hampered by the rising window line and small rear screen, but it's not as difficult to see out the rear of as you might imagine. Besides, all trims come with front and rear parking sensors and a 360-degree camera to help you out when parking.

LED headlights are standard on all versions and from SE trim you get high-beam assist. Pixel LED headlights are available as an option. They can stay on main beam even when you don’t have the road to yourself because they shape their light output to avoid dazzling other road users. A self-parking system is on the options list. 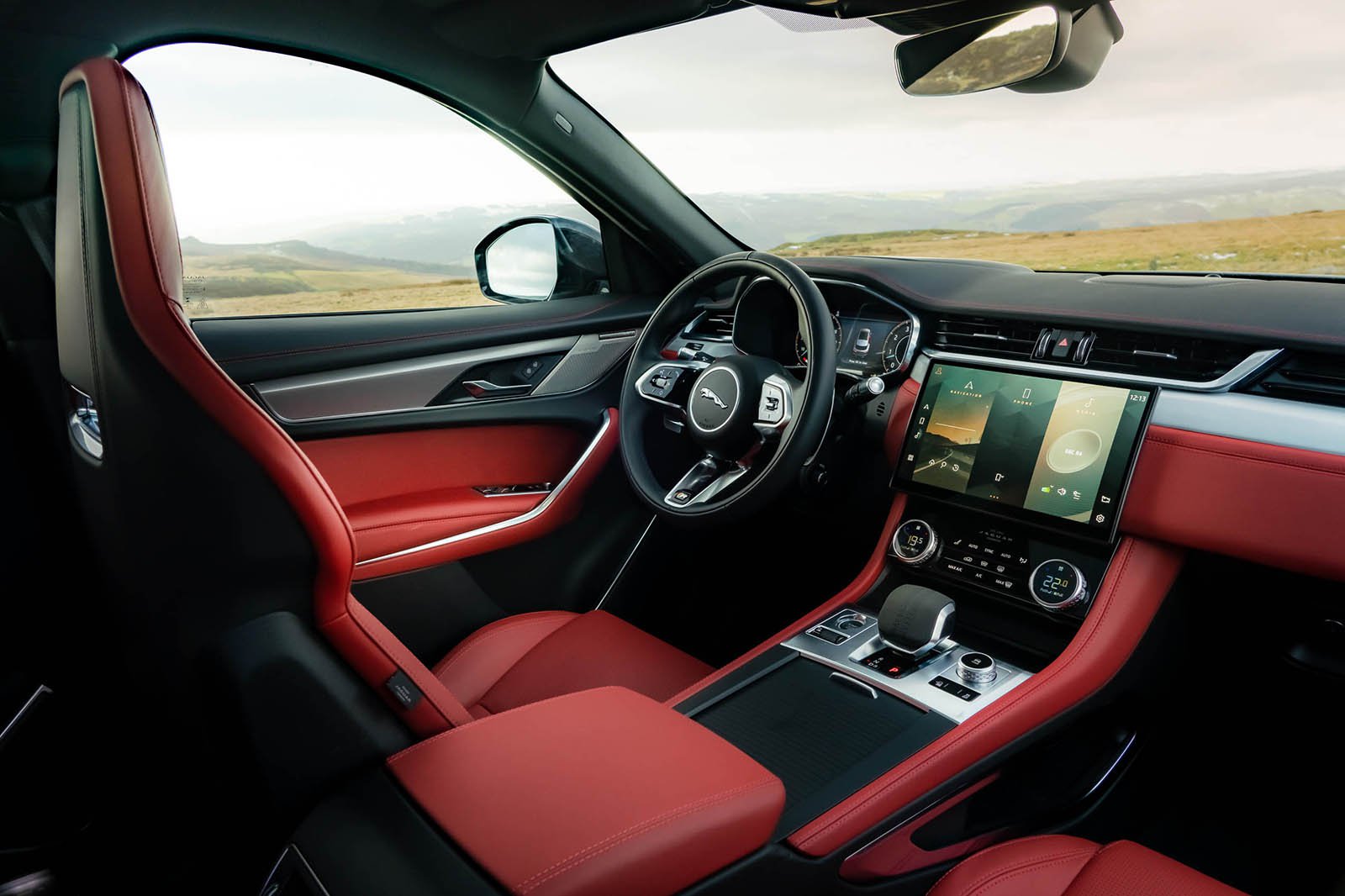 The F-Pace features Jaguar’s Pivi Pro infotainment system. It responds swiftly and the large 11.4in touchscreen's graphics and resolution are impressive. You also get lots of functionality, including built-in sat-nav and Apple CarPlay/Android Auto phone integration.

As touchscreen systems go, it's one of the better ones in the class. It has intuitive menus that are relatively easy to operate on the move, with a line of conveniently placed shortcut buttons for switching between the main functions. Even the home screen is configurable, so you can stick the tabs you use the most where you want them. The reason we say "as touchscreen systems go", though, is that we prefer the option of using a physical rotary controller. You get one of those in the BMW X3 and it's less distracting to use while driving.

The standard sound system is perfectly acceptable, but music lovers can pick from two optional upgrades: a 400-watt Meridian Sound System with 12 speakers (standard on HSE models) or a more powerful version with a 600-watt amplifier and 16 speakers. So far we’ve only sampled the former and it's utterly fantastic, with weighty bass notes balanced by a crisp, precisely drawn treble.

The F-Pace’s interior was overhauled as part of its mid-life update – and what a transformation it is over the original models. The interior looks and feels genuinely upmarket with next to no scratchy plastics anywhere.

You get a mix of plush, softly finished surfaces, punctuated with classy wood veneers (depending on the trim) and nicely damped switches.

It's also solidly screwed together and feels right at the sharp end of this class, making it a worthy alternative to the Audi Q5 and BMW X3. It's also miles better than the Alfa Romeo Stelvio interior.

The Kia Sorento is not the cheapest seven-seat SUV, but it's h...