* Our favourirte cars * Read about the best cars * Find out why we chose them... 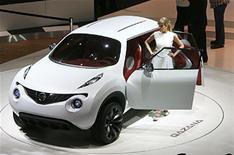 Nissan has unveiled this Qazana concept car at the Geneva motor show.

The company says the wacky, sporty styling is inspired by beach buggies and motorbikes, but despite the concept car tag, this Qazana is about 85% the finished product.

It's a little brother to the successful Qashqai small family car crossover and will go on sale in the UK in autumn 2010.

The concept car is a four-seater, but the production version will sit five.

Some aspects of the interior may be toned-down for the production car, but the motorbike-seat-and-tank-inspired centre console (seen in our gallery on the right) will stay.

No details have been released about what engines could power the Qazana, but given the spory styling we would expect a spory engine to go in the car.

The concept car was designed and built in the UK and the production vehicle will be made at the company's plant in Sunderland.

Why it's number one It may look a bit barmy, but company officials say it is 85% production ready. Nissan is set to re-write the rulebook once again.