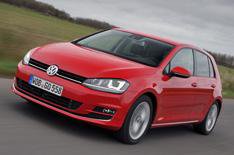 This is the new Volkswagen Golf, and although its lines are instantly familiar, VW hasn't just updated the existing model as it did the previous time it introduced a 'new' Golf.

The Mk7 Golf is built on an all-new platform, while weight-saving measures, such as the use of high-strength steel, make it up to 100kg lighter than its predecessor.

This, along with new engines and better aerodynamics, has helped VW reduce the Golf's fuel consumption by an average of 14% across the range.

The entry-level car uses an 84bhp 1.2-litre turbo engine that does an average of 57.7mpg and emits 113g/km of CO2. Meanwhile, the other petrol option at launch is a clever 138bhp 1.4 turbo, which shuts down two of its cylinders under light engine loads such as periods of motorway cruising to save fuel and minimise emissions; it manages average economy of 60.1mpg and emissions of 109g/km.

This is our first drive of the all-new model in the UK.

What's the 2013 Volkswagen Golf like to drive?
We tried the 138bhp 1.4 petrol engine and the 2.0-litre diesel, both of which feel strong and punchy. The petrol is particularly impressive because it has a broader spread of power and is super-smooth, whether it's running on four cylinders or two; you're unlikely to even notice it switching between the two.

Refinement in general is impressive. There's some tyre noise, and the door mirrors generate some wind noise at motorway speeds, but overall the Golf is quieter than most of its rivals.

The latest Golf also has slightly quicker steering than its predecessor, so it feels that little bit more eager to turn in to bends. What's more, SE models and above come with a system that lets you alter the throttle response, and the shift speeds of the optional DSG semi-auto gearbox.

Don't think this all makes the new car feel dramatically different from its predecessor, though. The steering feels a little lighter and easier at parking speeds, but it's much the same as in the outgoing model above that, and the balance the car strikes between ride and handling feels just as familiar.

Fortunately, this is no bad thing, because it means the steering offers plenty of reassurance and the car manages to blend a comfortable ride with good body control.

The one slight word of caution is that all the cars we've driven cars have more than 120bhp. These get a sophisticated multi-link rear suspension design, like the current car's, whereas less powerful models switch to a less complex, but lighter, set-up.

What's the 2013 Volkswagen Golf like inside?
The new Golf is longer and wider than its predecessor, which translates into more leg- and shoulder room front and rear. True, there's less headroom because the roof is lower than before, but six-footers still have plenty of space.

Drivers of all sizes should be able to find a comfortable driving position, too, thanks to the huge range of adjustment on offer. Meanwhile, all-round vision is excellent, despite the introduction of quarterlight windows ahead of the front doors, which bring a small extra pillar behind the windscreen.

The dashboard is now angled towards the driver, and is a doddle to use thanks to simple rotary climate controls and a standard touch-screen infotainment system that features clear menus and handy shortcut buttons.

The only slight disappointment is that, aside from more sophisticated on-screen graphics, the perceived quality of the things you see and touch hasn't moved on. As a result, the Golf's cabin isn't as appealing as the latest Audi A3's, although it still feels a cut above most other rivals'.

At the other end of the car, the boot has grown from 350 litres to 380, making it one of the biggest in the class, and it now features an adjustable floor. This divides the space in two and reduces the load lip when it's in its higher setting. It also ensures there's no step up to the rear seats when they're folded down.

Every model is equipped with a DAB radio, Bluetooth and seven airbags, but the mid-level SE trim is the pick of the range because it brings smarter interior trim, adaptive cruise control and a City Emergency Braking system that automatically applies the brakes if it detects an imminent collision at speeds below 19mph.

Other safety equipment that will be available includes a fatigue-detection system, lane-keeping assist and traffic sign recognition.

Should I buy one?
Despite the improved technology and efficiency, the new Golf will cost you about the same as an equivalent version of the current car. It starts at 16,330 for a 1.2 three-door, with the five-door carrying a 565 premium. The 138bhp 1.4 petrol will come only in pricey GT-spec in the UK.

The new Golf will sit between the Ford Focus and Audi A3 on price, then, although it's likely to work out cheaper than the Focus in the long run at least for private buyers because of better resale values. The A3 will provide a sterner test, especially when Audi introduces the five-door Sportback version in spring 2013.

Still, whichever turns out to have the edge, it's clear that Volkswagen has succeeded in producing a better Golf, and that makes it one of the very best small family cars around.

Read the Volkswagen Golf review for parents at Mumsnet Cars

By Steve Huntingford and Will Nightingale