Everything you need to know about the Volvo XC90, including pricing infomation, engine and specification details and future variants... 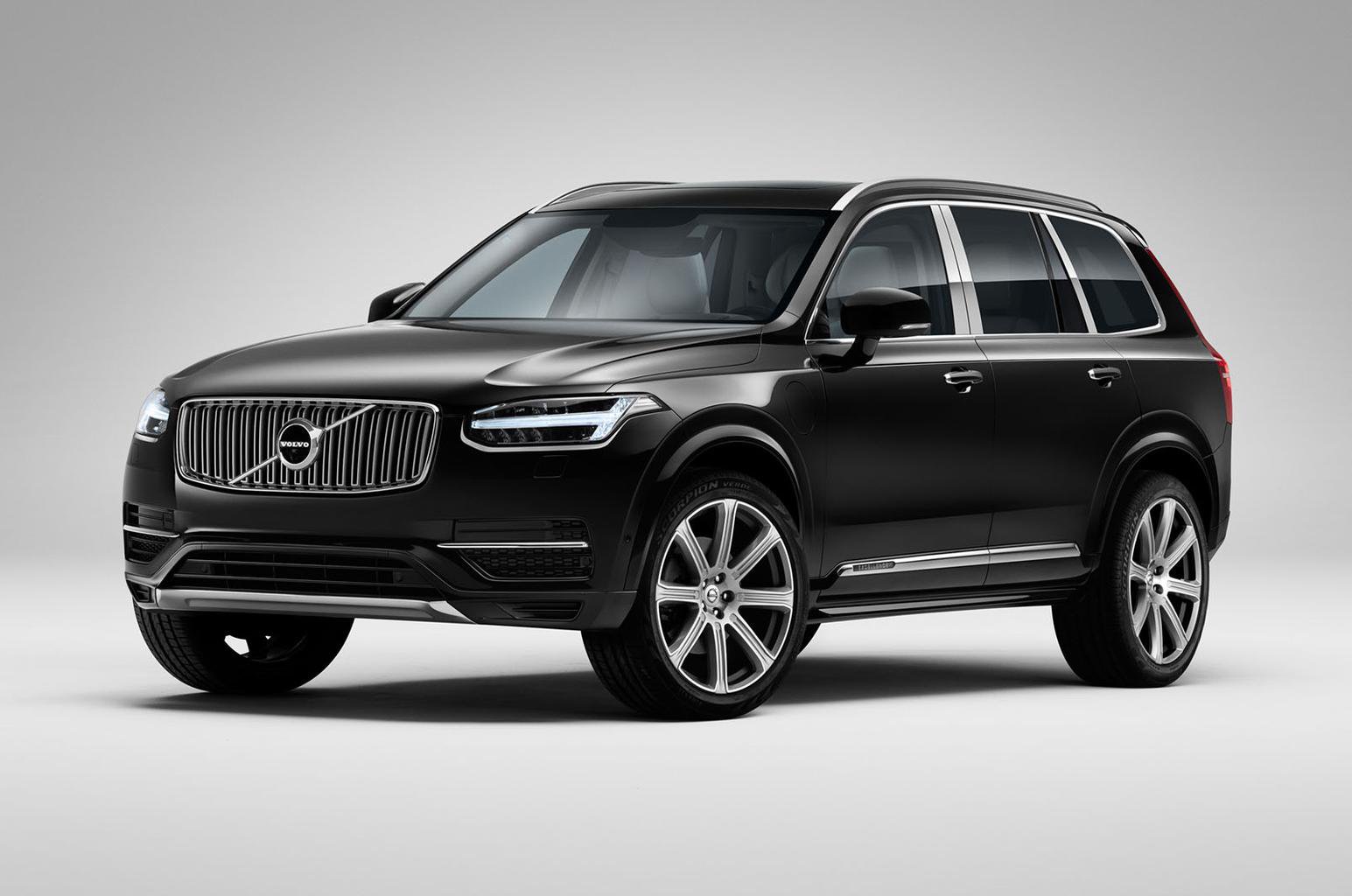 The all-new seven-seat Volvo XC90 is on sale with prices starting at £45,785, and is predicted to outgun rivals such as the Audi Q7, BMW X5, Land Rover Discovery Sport and Mercedes-Benz M-Class through a combination of its luxury, spacious interior, engine efficiency and ground-breaking safety technology.

Its arrival is also significant because it marks the acceleration of Volvo’s plans to overhaul its range of cars. Bought by Chinese firm Geely in 2008, the firm has spent £6.5 billion creating a new high-tech structure to underpin all its future vehicles. As such, the XC90 is seen as a showcase for future Volvo design, quality and styling. "We are not just launching a car, but relaunching our brand," said Volvo president Hakan Samuelsson.

The new XC90’s arrival also marks the end of production for the long-standing previous-generation car, which has been on sale since 2002 but which has consistently attracted buyers through a combination of keen pricing and its spacious interior. In the run down to it going off sale, current discounts of 25% off list price can only get better.

The new XC90 will be offered with several powertrains, including a petrol-electric plug-in hybrid that will be capable of returning in excess of 100mpg - officially at least.

The range-topping 394bhp hybrid – badged T8 ‘Twin Engine’ – uses a supercharged and turbocharged 2.0-litre petrol engine to power the front wheels, while a 79bhp electric motor propels the rears. Six engine modes allow the driver to choose how to power the car. These range from pure electric to full hybrid power, plus special off-road settings.

Using only the electric motor, the seven-seat XC90 T8 will travel around 26 miles on a single charge. Official combined CO2 emissions have been confirmed as 49g/km, which means fuel economy of around 166mpg.

Volvo will also offer two diesel engines in the new car – both four-cylinder units that will be badged D4 and D5. The latter produces 222bhp and 347lb ft of torque and is available with four-wheel drive only, with estimated economy of around 47mpg. Entry-level cars get the 187bhp D4 with 295lb ft of torque, are front-drive only and will achieve up to 56mpg.

The D5 engine will be mated to an eight-speed auto gearbox, with D4 buyers getting the choice of a six-speed manual gearbox or the auto.

Volvo UK has also added the petrol-powered T6 variant of its new XC90 to the model range. Since orders for the seven-seat SUV opened in October, Volvo UK has been surprised by the number of customer enquiries for petrol-powered versions. The T6 is equipped with a 316bhp, 295lb ft version of the new 2.0-litre, four-cylinder Drive-E engine, which is both supercharged and turbocharged. Pricing has yet to be confirmed.

All engines will be offered with a choice of three trim levels: Momentum, which replaces SE in the traditional Volvo UK line-up, R Design, which carries on as before and Inscription, which replaces SE Lux and Executive. In time, all UK Volvo models will follow this pattern. Standard equipment across the range includes sat-nav, cruise control, rain sensors, LEDs, climate control and leather interior trim. Consequently, Momentum is expected to account for the bulk of sales.

Volvo has always been well-known for safety, but the company has made the bold statement that the new XC90 will be the safest model it has ever made.

This claim is underlined by two new pieces of technology. One system brakes the car automatically if it is about to turn in front of an oncoming car at a junction. The other detects an impending accident and automatically tightens the seatbelts to hold passengers more firmly in place.

Other safety features in the new XC90 include updated automatic braking systems from today’s Volvos. These detect cars, cyclists and pedestrians in front of the car and automatically apply the brakes if a potential collision is detected.

Other highlights include Queue Assist, which automatically follows the car in front in slow-moving traffic, and a digital display that relays information from road signs to the dashboard in front of the driver.

The XC90 also has 12 ultrasonic sensors positioned around the car which enable the car to park itself in both a parallel space and a perpendicular parking bay.

Like it, loathe it or feel nonplussed by it, the new Volvo XC90 has presence from the outside. Climb aboard and your sensations are amplified again, albeit almost all in a positive way.

The centre of the car is dominated by a large touch-screen. It is a triumph that should leave rivals playing catch-up. The user can swipe between three main screens – scrolling through car set-up options, basic car functions and onboard apps. First impressions suggest it is intuitive and easy to use; the sat-nav view, for instance, benefits from the phone screen-style presentation, the phone options are clearly labelled and the quality of the on-screen graphics on the album playlists impressive.

The knock-on benefit of this screen is that there are only eight buttons on the dash, all located below the screen. This leaves large swatches of open or uncluttered space, which highlight the quality finishes on the surfaces or accentuate the sense of space. Other car makers will surely follow suit.

The driving environment is also attractive. The digital dash looks well thought through, and the graphics convey a premium feel. The seats – so long a Volvo strength – offer great all-round support, as well as having new built-in safety features.

The middle row of seats are equally plush. They slide and recline, and there's good room on offer, especially if the rearmost seats aren't in use. All the seats fold flat individually (an operation that's possible via the centre touchscreen), while all can also take full-size child seats. There's the option, too, of speccing an integral booster cushion in the middle seat. Families will love this layout.

The third row of seats is, as ever, a compromise. There are no Isofix points, but child seats held in place by seat belts can be used. Volvo says the seats are fine for people up to 170cm tall, which seems reasonable both in terms of comfort on the move and accessibility through the rear doors. Anyone taller is unlikely to thank you for the loss of dignity climbing aboard or the discomfort in a long journey.

Volvo describes the XC90 as an alternative to the Audi Q7, BMW X5 and Mercedes M-Class. It says it has deliberately eschewed any conventions set by its rivals, instead staying true to its understated Swedish roots. All this rings true when you sit inside the XC90, and hints at a company that has an underlying confidence, something it hopes customers who don't just follow the crowd will pick up on.

Buyers will also have the option of air suspension for around £2000, which can be set to five comfort settings.

Read our full verdict on the XC90's cabin

A limited edition of 1927 cars will kick-off sales of the new XC90 in an online sale from September 3. Called the Volvo XC90 First Edition, the quantity of 1927 celebrates the year Volvo was created. UK buyers will be able to buy a D5-engined car with every possible option specified, plus 21-inch alloys and a unique interior design for £68,785.

Mainstream sales will then follow with the launch of the XC90 D5 AWD model, with list prices starting from £45,785. From early October customer orders will be taken, ahead of projected first deliveries next March.

Although Volvo has traditionally discounted the XC90 by as much as 30%, it hopes to end this policy with the new car. The UK production allocation is expected to fall below demand for at least 12 months after launch. However, we’d still expect modest discounts of around 5% to be available six to eight months after launch.

Everything else you need to know about the new XC90

A four-seat super-luxury version of the XC90 was revealed at the Shanghai motor show. The four-seat Volvo XC90 Excellence model will only be sold in selected markets, but won’t be offered in the UK, but is available with T8, D5 and T6 power trains and rivals the likes of the Range Rover SVAutobiography on outright luxury.

Key features of the XC90 Excellence include four seats instead of the usual seven, with unique interior trim, more legroom, a touchscreen infotainment system for rear passengers, retractable tables and crystal glasses made in Sweden.

Volvo’s vice president of product strategy, Lex Kerssemakers, said that the reaction to the standard car had given the firm confidence to explore higher-end models.

'The old XC90 was 12 years old - now we are talking to a new audience,' he said. So far we have 6000 pre-orders for the XC90 and we haven’t put a single one in a showroom for people to sit on or test drive; they are writing very large cheques based on what they have read and seen.'

When the XC90 was launched, Volvo put 1927 top-end models on sale on the internet, all of which sold out in 47 hours. Uk cars were priced at £68,000. Kerssemakers conceded that the success of that project had buoyed the firm’s desire to push further upmarket but added that the Shanghai show car was already in planning by that stage.

Volvo has confirmed details of the new R-Design trim that is due to go onto the new XC90. R-Design is the sportiest of the three trim levels on offer. It adds cosmetic features as well as driving-focused options to the already generous standard specification.

On the outside, R-Design models get their own metal surrounds to the windows, front spoiler and grille. They’ll also come with silver roof rails, matt silver wing mirrors and 20-inch alloy wheels.

Inside, buyers will find sports seats (clad in leather and suede), R-Design pedals and gearbox paddles on the steering wheel. Other features include illuminated door sills and a unique R-Design theme to the instrument cluster.

There will also be another trim level at the top of the XC90's range, called Inscription. Details of the Inscription trim are yet to be released, however, it is expected to be the most luxurious of the three offered.

The new Volvo XC90 is priced to compete with the Audi Q7, BMW X5 and Mercedes M-Class, and will not be discounted in the same way as the outgoing car, according to head of product and pricing Iain Howat.

Howat explained that the culture of 25% discounts off the list price of the outgoing XC90 would stop with the launch of the new car.

"The liklihood is that demand will outstrip supply for at least 12 months, so our level of incentives to dealers will reduce, and I’d expect them to fight for as high a margin as they can get," said Howat. "The new XC90 has been designed and kitted out specifically to take the fight to its rivals – and we believe we have a credible alternative to them."

Howat also reiterated Volvo’s long-held ambition to be regarded as a premium manufacturer in the vein of Audi, BMW and Mercedes. "We now have the latest chassis and powertrain technologies, confident design and advanced technology. There’s no reason buyers can’t regard us as a credible alternative to the mainstream," he said.

Read about the rivals the Volvo XC90 has to beat