* Have you got a problem? * Our team is here to help * Submit your questions here... 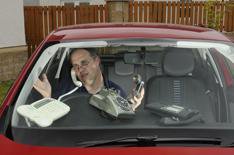 The more parties involved in a dispute, the harder it can be to resolve, but Richard Fenwick has proved that persistence pays off.

When a crack appeared in the windscreen of Richard's Renault Mgane, he took his car to Dundee Renault. There was no damage, which suggested that the screen was faulty, but the dealer suggested Richard contact his insurer, who called in Autoglass.

However, the Autoglass fitter wasn't happy. Richard told us: The "cheesewire" used to remove the old screen needs a gap around the window, and he felt the gap at the offside upper corner was too small and that he may scratch the paint.'

• Remember, disputes with several parties can take time to resolve.
• Be polite and patient, but make your views clear.
• Don't give up easily.
Renault customer services suggested Autoglass replace the screen at a Renault bodyshop, so any damage could be repaired promptly, but Richard was advised this could cost as much 250.

Richard went back to Renault and spoke to a different customer service representative. Finally, someone wanted to help resolve his problem, and the screen has been replaced under warranty.