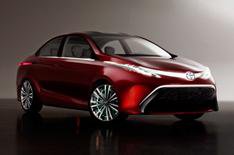 Three Toyota concept cars make their debut at the 2012 Beijing motor show. The Yundong Shuangqing is a China-only hybrid model, while there are hatchback and saloon versions of the Dear Qin - a budget-priced compact family car.

Toyota hasn't released any technical details of the Yundong Shuangqing, but has confirmed that it previews a new hybrid model that will be sold only in China, from around 2015.

Full details of Toyota's Beijing concept cars will be revealed at the show, which opens on April 23.