BMW’s new front-wheel-drive MPV needs more than just a spacious interior if it's to beat the Golf SV. We put them to the test... 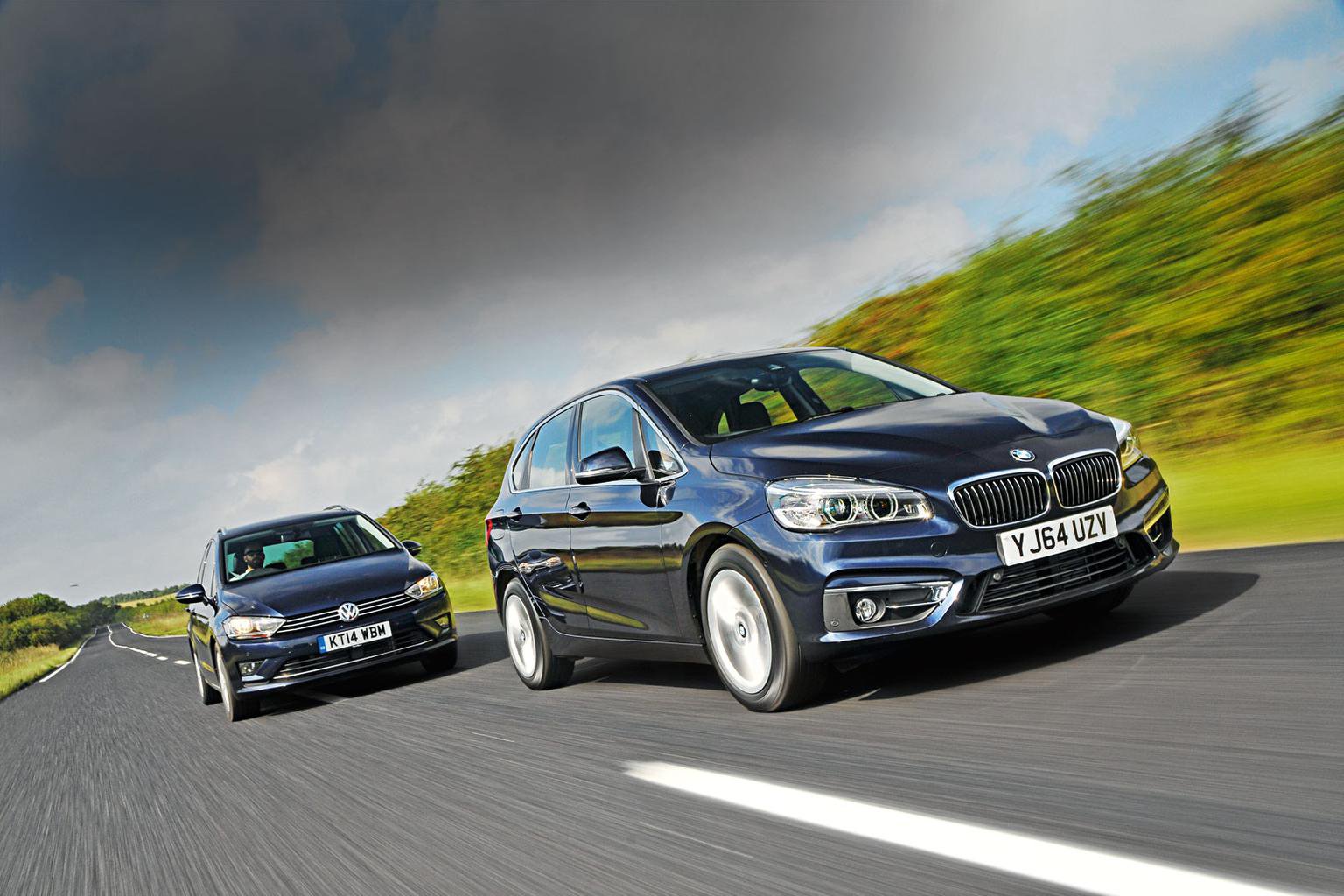 Until recently the very idea of a front-wheel-drive car, let alone an MPV, from BMW would have raised more than a few eyebrows. Yet the 2 Series Active Tourer has arrived as clear proof that the brand is expanding its horizons beyond the ‘Ultimate Driving Machines’ it’s famous for. The large boot, high roofline and long wheelbase make it, arguably, the brand’s most family-friendly model yet.

To put this new breed of BMW through its paces we’re comparing it with the new Volkswagen Golf SV in range-topping GT trim.

Anyone searching for an MPV at this price will be after a lot more than just space, such as a versatile cabin, low running costs and good equipment levels.

In the back, they feature sliding rear seats (split 60/40), which give greater flexibility for carrying awkward loads or tall passengers.

The Golf has the advantage when it comes to sheer space, though. Whether you are in the front or back, the SV has more head-, leg- and elbowroom than the BMW. The Active Tourer is not far behind, and will still accommodate six-footers with ease, but the narrow rear windows aren’t great for giving kids a good view out, and the optional (£945) sunroof cuts into the available headroom.

On paper, the Golf also has the edge when it comes to boot capacity, but in practice it’s actually the BMW that shines in this area. A powered tailgate (operated by the key fob) is standard across the range,
so you can pop it open when you’re weighed down with bags. Better still, the rear seats are spring-loaded, so at the push of a button (handily placed in the boot) they fold almost flat, leaving a big, deep load bay with no steps.

Rearranging the seats in the SV is a pain by comparison; the rear seats can’t be dropped from the boot, so you have to stretch across the rear bench to release and fold them.

The BMW’s cabin has a high-quality sheen, with a good mixture of soft-touch materials, supportive sports seats and the superb iDrive infotainment system, which has a 6.5-inch screen as standard. Visibility is an issue, though, because of the thick pillars, so you’ll find yourself straining for a better view at tight junctions.

The SV feels a bit bland and less plush, and although the seats are comfortable, they’re not as broadly adjustable as those in the BMW. The touch-screen can be a bit slow to respond, too, and you have to pay extra for luxuries such as climate control and keyless go, which are standard in the Active Tourer. However, the VW does get sat-nav, and the dash is logically laid out and really easy to use.

Both contenders come with 2.0-litre diesel engines, paired with six-speed automatic gearboxes. They produce an identical 148bhp, but the SV pips the 2 Series in the performance stakes. It was close to half a second quicker from 30-70mph, and was marginally faster in all but one of our kickdown tests. The Active Tourer is no slouch, though, and its auto ’box transmits the engine’s power to the wheels more smoothly than the automatic gearbox in the SV – which can get caught out when creeping along in traffic, or if you demand a sudden burst of acceleration.

In fact, all the controls in the BMW are ideally weighted, so you always know exactly how much pressure to apply to the pedals when required. This makes it very easy to drive smoothly, and it isolates its passengers from engine noise better than its rival, with a diesel grumble intruding only at high revs.

There’s a rush of wind noise over the windscreen at motorway speeds, and on coarse surfaces the 17-inch wheels generate a fair amount of road noise. That said, the Golf has similar issues.

Long trips on the motorway will be fairly comfortable in both cars because they feel stable at speed, but the SV is a fraction more agile on twisty roads.

In top-spec GT trim, the Golf gets 17-inch alloy wheels and suspension that’s 15mm lower than that on lesser trims.

The SV grips better than the BMW in tight corners, but the set-up does the low-speed ride no favours, because the SV jostles around over bumps. The (£815) adaptive dampers help smooth out the ride, but it’s a shame you can’t opt to remove the stiffer springs.

The 2 Series also gives buyers the option of adaptive suspension (£390), which was fitted to our test car. It helps it soak up larger bumps and potholes better than the Golf, without any sacrifice in body control through corners. There are three modes to choose from, via a switch on the centre console, but most buyers will leave it in the default ‘Comfort’ setting – which is well suited to everyday driving.

The BMW does command a premium over the Golf but it will cost considerably less to run.

Choosing the automatic gearbox in the SV over the manual pushes up CO2 emissions by 10g/km, while the auto in the BMW carries no penalty, so the BMW will cost private buyers less in road tax each year. Company car users also benefit; a 40% taxpayer will save money on BIK tax if they opt for the BMW.

With the notable exception of sat-nav, the BMW is generously equipped, so you’re less likely to spend extra on options than you might be in the Volkswagen. Perhaps surprisingly, luxuries such as leather upholstery and adaptive suspension are also a lot pricier to add in the SV than they are in the 2 Series.

As a private buy, the Golf starts to make more sense. The BMW will be worth slightly more as a used car after three years and 36,000 miles, but a lower purchase price on the Volkswagen means it will actually cost you less in depreciation. Dealers are likely to start offering bigger savings on the BMW in coming months, so you can expect the depreciation difference to lessen with time.

Both cars will cost the same to insure, but the 2 Series will set you back slightly less in ownership costs. This is because despite costing marginally more to service than the Golf, the BMW comes with a £375 servicing pack that covers you for five years.

The BMW has better fuel economy, too; our True MPG tests confirm that the BMW is the more efficient choice, because it returned more than 52mpg, beating the SV by a small margin. The Golf has the edge for safety kit, though, with adaptive cruise control and emergency city braking included.

The key areas that separate these two cars are practicality and refinement, and in both the Golf SV trails the 2 Series Active Tourer. The BMW’s cheaper company car tax and better fuel economy, classier cabin and smoother automatic gearbox also work strongly in its favour, to outweigh its shortcomings. It’s a polished new addition that will fit the bill for those who value a premium image, as well as great cabin versatility and comfortable family motoring.

Against Firm low-speed ride; rear seats not as clever as the BMW's

Volkswagen Golf SV - all you need to know