More for you |
2021 DS 9 luxury car revealed: price, specs and release dateWhat is GAP insurance and how much should you pay for it?Why does the new Hyundai i10 get five stars?New MG ZS EV vs new Renault Zoe2020 Jaguar XE long-term test review
Home
News
BMW 320d Efficient Dynamics
news 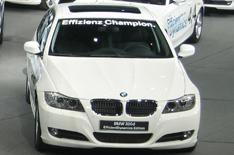 What is it?
The new BMW 320d Efficient Dynamics saloon is the most efficient 3 Series ever.

What's new?
The 320d Efficient Dynamics saloon has a number of changes over the standard car, all in the interests of lower fuel consumption and CO2 emissions. Thanks to these, it emits just 109g/km of CO2 and averages 68.9mpg.

As you'd expect, the new model has the same range of BMW EfficientDynamics features that you'll find on any 320d. These include an engine stop-start system, brake energy regeneration and electric power steering.

On top of those, the Efficient Dynamics saloon has:

What's it like?
The good news is that the 320d Efficient Dynamics saloon is as brilliant to drive as any other 3 Series. Because of the improved torque, you don't notice the drop in power and acceleration is strong.

The lowered suspension doesn't damage the ride quality, either, and the steering and handling are as sharp as ever.

Here's the clever bit. The longer gearing keeps engine revs low to cut fuel consumption and this works in tandem with a new dual-mass flywheel that helps to smooth out the vibrations that you'd normally expect when the engine is barely above tickover.

BMW reckons that most drivers will, on average, be using 500rpm less than a standard 320d driver and, on the evidence of our brief drive, that's entirely possible. Cruising at a steady 70mph, the car's trip computer showed that we were achieving an average of around 70mpg.

What are the advantages?
The changes make the Efficient Dynamics model much cleaner than the standard 320d, which averages 58.9mpg and emits 128g/km. Its even more efficient than the recently launched 316d, which emits 118g/km and averages 62.8mpg.

As a result, the 320d Efficient Dynamics saloon will cost just 35 a year in road tax and falls into the lowest category for company car tax.

For the moment, the new technology will be used only for this car - bespoke Efficient Dynamics versions of BMW's other models aren't in the pipeline. BMW says that similar features 'might be a strategy' for other models within the next two to three years, however.

How much will it cost?
The 320d Efficient Dynamics saloon will be priced the same as the 320d SE, which currently costs 26,680. It goes on sale in January, with first customer deliveries expected in March.

Apart from the new wheels and slightly lower stance it looks just like any other 3 Series, too, although there are Efficient Dynamics badges on the bootlid and in the cabin.

The price will be equivalent to the 320d SE's, too, which currently costs 26,680. The new 320d Efficient Dynamics saloon goes on sale in January, with first customer deliveries expected in March.