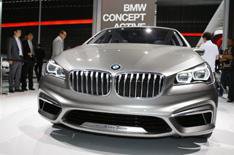 This is the BMW Concept Active Tourer, a concept car that gives an idea how BMWs forthcoming first front-wheel-drive model will look.

It has made its public debut at the 2012 Paris motor show; the production version, which is likely to be called the 1 Series Gran Turismo, is due on sale in 2014.

The Concept Active Tourer is a practical hatchback with a tall body, in the same mould as cars such as the Mercedes-Benz B-Class and Volkswagen Golf Plus. At 435cm long and 156cm high it has almost identical proportions to the B-Class; its 3cm shorter than the current BMW 1 Series and 10cm taller.

Underneath, the Concept Active Tourer uses a new platform that will be the basis for the next Mini, which is due late next year. Itll also be used for the next BMW 1 Series hatchback, which is due in 2018 and which will no longer be rear-wheel drive.

Although the Concept Active Tourers side window profile and rear pillar are reminiscent of the X5 SUVs, its styling is a departure for BMW, with a more one-box shape than any of its current models. Theres also a new-look front grille that curves up into the bonnet.

There are a number of features to help the car cut through the air as efficiently as possible. Vents in the front bumper channel air over the front wheels to create an air curtain and reduce drag at speed, while holes at the rear of the wheelarches suck out air and channel it through vents in the front doors to reduce turbulence. Aero blades at either side of the rear window push air inwards.

Details such as the elaborate door mirrors, slim door handles and 20-inch alloy wheels won't feature on the production version, and we'd expect more conventional front and rear bumper designs, too. Other than that, little else is likely to change.

The concept car has a four-wheel-drive plug-in hybrid powertrain. BMWs new 1.5-litre three-cylinder petrol engine drives the front wheels, while an electric motor drives the rear pair. When fully charged, theres an electric-only range of around 19 miles. BMW quotes average fuel economy of over 113mpg and CO2 emissions of less than 60g/km.

No performance figures have been released, but the electric motor alone provides 148lb ft of torque from standstill. Theres a combined maximum of 188bhp when it's combined with the petrol engine.

Although this plug-in hybrid system will be available for production models there'll also be front-wheel-drive versions that use conventional petrol or diesel powertrains. The range of engines is likely to include the three-cylinder 1.5 petrol with various power outputs, and new diesel engines. The new Mini due in late 2013 is likely to use these engines, too.

BMW says the Concept Active Tourer has been designed from the inside out to create an airy, practical cabin geared towards family use.

Cabin is trimmed in soft-touch leather, with contrasting orange seams

There are five seats, which have a slightly raised, MPV-style seating position, and the rear seat backrest has a 40/20/40 split. The rear seats fold to give a completely flat load area.

As well as deep side windows, the Concept Active Tourer has a glass roof that lets in extra light. It uses what BMW calls Cool Shade technology; particles within the roof react to an electrical current so the driver or passengers can change it from light to dark at the touch of a button.

A range of materials is used for the Concept Active Tourers cabin, including soft-touch leather, contrasting orange seams and bands of streak line trim created by laminating two types of wood together.

Most of the Concept Active Tourers controls including the window switches have a flush, black panel look; information is displayed through a clear top panel, backlit in orange. More conventional controls are expected for the production version, although the overall architecture of the dashboard and trim is likely to remain largely unchanged.