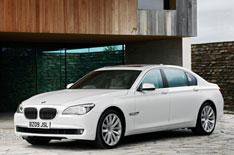 BMW has unveiled its updated flagship 7 Series model, the 760Li.

Exterior changes over other long-wheelbase 7 Series models include an extra-wide front grille frame, V12 badges on the side, twin rectangular exhaust tailpipes and chrome rain channel trim on the roof.

The 760Li is powered by BMW's first twin-turbocharged V12 engine, a 6.0-litre unit that produces 544bhp.

It also features the brand's first eight-speed automatic gearbox, which BMW says is no bigger or heavier than a six-speed auto 'box .

The official performance figures give a 0-62mph time of just 4.6 seconds. That's a second quicker than the previous 760Li. Top speed is limited to 155mph.

BMW says the new model is also over 5% more efficient than the previous version, thanks to a number of BMW's EfficientDynamics measures. Official average fuel consumption is 21.7mpg with CO2 emissions of 303g/km.

The new L760Li features individually heated seats for both front and rear seat passengers, a multimedia sat-nav system, automatic soft-close doors and an electrically powered sunblind for the rear windows as standard.

The 760Li will go on sale in September, but prices are yet to be confirmed.