More for you |
Used Ford Fiesta long-term test reviewWhat can I do about a security issue on my car? Best cars for less than £250 per monthWhy is my new car’s fuel economy so poor?Top 10 used electric cars
Home
News
BMW's big autumn updates
news 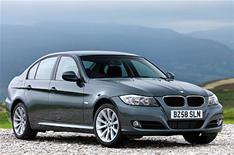 Updating its 1 Series Coupe for the 2010 model-year, BMW is offering two new entry-level engines: the 118d diesel and 120i petrol.

Both cars come in ES, SE and M Sport trims, while the 120i also gets a new Sport trim. The Sport trim gets everything ES has, plus:
• 17-inch alloy wheels
• Sports seats
• Leather-trimmed steering wheel
• Multi-function controls
• Front foglamps

All the additional kit comes at no extra cost. This Sport trim is also available with the 118i, 118d, 120i and 120d Convertible for the same price as ES trim.

3 Series updates
Additions to the 3 Series range in September include the recently announced 316d saloon from 23,330, that's good for 62.8mpg and 118g/km.

Business Edition versions have also been announced. These are based on the four-cylinder SE and M Sport saloon and Tourer estate, and add 2500-worth of extra equipment including:
• Leather upholstery
• Business sat-nav
• Bluetooth
• Updated iDrive controls
• Unique 18-inch alloy wheels (M Sport versions only)

Other updates on the way
Further updates in the BMW range this autumn include the arrival of the greener 730d and range-topping 760Li luxury saloons, the latest iDrive system for the X5 range, and a special-edition package for the 6-Series.

Expect an announcement and more information on its Project i programme, however, which could include news on upcoming BMW-branded electric vehicles.