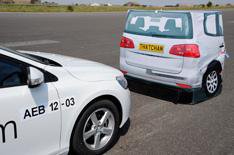 Cars fitted with automated emergency braking (AEB) systems could cut insurance premiums by as much as 10% from this month.

The Association of British Insurers (ABI) said today that the new AEB technology would be incorporated into car insurance group ratings.

It's estimated that cars fitted with AEB will have their insurance rating lowered by up to five groups, which could mean a 7-10% cut in premiums.

Crash-test organisation Euro NCAP has already said that AEB systems will be included in its ratings from 2014, meaning that, in future, cars without this technology will be unlikely to gain Euro NCAP's top five-star accolade.

AEB systems use cameras, radars and light-sensing technology to detect obstacles in the vehicle's path. If the driver doesn't react quickly enough, the system takes over and applies maximum braking power.

Data from a study carried out in the US by the Insurance Institute for Highway Safety and from Volvo, which pioneered the technology in the XC60 in 2008, revealed that AEB systems reduce low-speed crashes by 27%.

Three quarters of all insurance claims are made after rear-end shunts at less than 20mph. The research also shows that preventing such collisions could reduce third party personal injury claims by 51%.

This would have a significant impact on reducing the 'crippling escalation of whiplash claims', said James Dalton, the ABI's head of motor and liability.

Thatcham, the motor insurance repair industrys research centre, which is testing the safety systems, added that 160,000 whiplash claims could be prevented with AEB.

Anders Eugensson, Volvo's director of governmental affairs, said that AEB will be key in meeting Volvo's target of zero serious injuries or fatalities in its cars by 2020.

In order for a car to be eligible for a group rating reduction, it must be satisfactorily tested by Thatcham, it must have AEB fitted as standard, and the system must be either continually active or, if it can be switched off, it must reset each time the car is started.

At the moment, just two cars the Mazda CX-5 and Volvo V40 are eligible for a reduction in their insurance group rating. A further eight cars, including the Lexus LS and every Volvo model except for the C30, C70 and XC90 and the new MK 7 Volkswagen Golf, are expected to get the green light after testing.

There are 47 other cars now on sale with AEB available as an option, including the BMW 3 Series, BMW 5 Series, Ford B-Max, Ford Fiesta, Ford Focus, Vauxhall Insignia, Mercedes-Benz C-Class, and the Volkswagen Up.