More for you |
2020 new car sales revealed: who were the winners and losers?New issue of What Car? magazine on sale nowPrivate car sales could be illegal during the latest coronavirus lockdown2021 What Car? Car of the Year Awards: the shortlistAll the best new cars coming in 2021
Home
News
New 2013 VW Golf Mk7 revealed
news 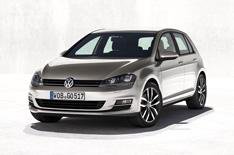 This is the new 2013 Volkswagen Golf. Its the seventh-generation version of VW's big-selling model and is lighter, more efficient and more practical than the current model. It goes on sale in October 2012 and entry-level models are likely to be cheaper than those they replace.

As ever, the Golfs styling has evolved subtly, with a characteristic thick rear pillar and styling that echoes both the current car and the Golf Mk4 and 5. The overall proportions have changed slightly: the leading edge of the bonnet is lower and the front wheels have moved forward within the body, to give a shorter overhang.

The new Golf is based on the VW Group MQB platform, which is also used for the latest Audi A3 and 2013 Seat Leon. Itll be used for a range of other models, too, including the new VW Tiguan and Touran.

2013 Volkswagen Golf design and engines
The new VW Golf is 5.6cm longer than the current model, 1.3cm wider, 2.8cm lower and has a 5.9cm longer wheelbase. Thanks to the extensive use of high-strength, hot-formed steel in its construction, and a range of other weight-saving measures, its up to 100kg lighter than the current car.

In combination with a new range of engines, improved aerodynamics and other efficiency improvements, CO2 emissions have been reduced by an average of 13.9% across the range.

The entry-level engine will be an 84bhp 1.2 TSI petrol that averages 57.7mpg and emits 113g/km of CO2. Therell also be a 138bhp 1.4 TSI petrol with cylinder-deactivation (ACT) technology, which shuts down two of its four cylinders under light engine loads to save fuel. It averages 58.9mpg and 112g/km of CO2.

Eventually, a higher-powered 1.2 TSI, a non-ACT 1.4 TSI petrol and a higher-powered diesel engine are expected to join the range. The MQB platform has been developed to accept five- and six-cylinder engines and four-wheel-drive, so these would be possible - but not necessarily likely - for the Golf. VW sources suggest a replacement for the high-performance Golf R model is unlikely.

Two rear suspension set-ups will be available. Versions with power outputs below 121bhp get a lighter, simpler system; the rest get a more sophisticated multi-link system, like the current car's. A new Progressive Steering system that changes the steering ratio to boost low-speed manoeuvrability and reduce the effort needed to turn at speed is standard across the range.

Volkswagen says the Golfs refinement has been improved. From SE trim upwards, the car will have as standard a system that offers four driving modes (Eco, Sport, Normal and Individual) and adjusts the engine management and air-conditioning systems accordingly. Models with a DSG semi-auto gearbox also have a Comfort mode.

Longer and lower than current Golf; front wheels have moved forward within the body

Whats the 2013 Volkswagen Golf like inside?
VW says that interior packaging is improved, thanks to a longer, wider cabin space. Theres an extra 2cm of front seat travel, it says, and a 1.5cm improvement in rear legroom. Headroom has been slightly reduced, but weve sat in the front and rear seats and six-footers still have plenty of space to spare.

Boot space with the seats up has been increased from 350 to 380 litres and theres a wider tailgate opening thats designed to make loading easier. A two-position boot floor is standard.

The dashboard design is simple and fuss-free, and the centre console is angled towards the driver. The range of adjustment for the seats and steering wheel has been increased; theres also a bigger gap between the brake and accelerator pedals and the gearlever sits slightly higher, so its easier to reach.

The biggest changes are that an electric parking brake operated by a switch between the front seats is now standard. There are also new quarterlight windows ahead of the front doors, so theres a small extra pillar behind the windscreen.

Volkswagen has aimed at improving cabin quality over the current car. All versions now have extra metallic trim, while features such as the lined door pockets are retained.

2013 Volkswagen Golf equipment highlights
The Golf will be available with a wide range of sophisticated features, including new infotainment systems and high-tech safety kit.

All versions will come with Bluetooth connectivity and a DAB radio. They'll also get a touch-screen system; even the basic version has a 5.8-inch colour screen that senses when the driver or passenger is about to touch the screen and automatically switches from display to operating mode, highlighting the function that is about to be selected. It also responds to swipe and zoom actions, much like a smartphone.

The new City Emergency Braking Function uses sensors to detect an imminent collision and automatically applies the cars brakes at speeds below 19mph. Theres also a new system called Multicollision Brake that works by automatically applying the brakes after an initial collision in order to minimise any damage or injury in a secondary collision.

2013 Volkswagen Golf prices and specifications
Prices are yet to be confirmed, but in Germany the entry-level 1.2 TSI model is around 360 cheaper than the model it replaces. VW sources have told us that entry-level UK models are also likely to undercut their predecessors, but by a smaller amount.

Trim levels will be S, SE (which replaces Match) and GT (sportier trim, lowered suspension). Mid-spec models and above arent likely to be any cheaper, but will come with more standard kit.

Golf prices currently start at 16,425 for the 1.2 TSI 85 S 3dr; the three-door version of the new model will arrive in the UK at the same time as the five-door version and should start from around 16,200.

A new Golf GTI is expected later in 2013 the current model wont be built alongside the new car. The current-shape Golf Cabriolet and Golf Estate (which are built at different factories in Germany and Mexico respectively) will remain on sale. A replacement for the estate is likely during 2013, but the Cabriolet is expected to continue until at least 2014.

VW has confirmed that a new VW Golf Plus again with a taller, more practical body is due. Replacements for the current VW Tiguan and Touran models will also use the same underpinnings and technology and are likely to arrive within 18 months.