* Shanghai debut for luxury Porsche * Petrol-electric hybrid on the way * On sale in the autumn, from 72,266... 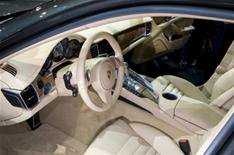 Prices are significantly cheaper than those in Germany because of pound-euro exchange rates, and competitive with those of rivals such as the Maserati Quattroporte, Mercedes-Benz S-Class AMG models and Audi's S8. The forthcoming Aston Martin Rapide and even Bentley's Continental Flying Spur are other potential distractions for buyers.

The seven-speed semi-auto gearbox will be available with all three versions, although it is an extra-cost option to a six-speed manual on the rear-drive model.

Full leather trim, variable suspension, bi-xenon lights, a touchscreen sat-nav will all be standard fittings, while the Turbo gets a Bose surround-sound stereo, metallic paint, heated front seats with 14- rather than eight-way electronic adjustment, and rear side airbags.

Options include stability control with a limited-slip differential, and electrically adjustable rear seats with built-in ventilation.

On the practical side, the Panamera has plenty of room to accommodate four tall passengers, and a boot that will take four suitcases, but that can be enlarged by folding down one or both of the rear seats