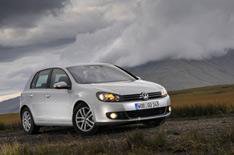 It's an attention-to-detail thing that shines through in just about everything VW does.

Take the efforts to curb noise in the cabin. There's now a special sound-damping film over the windscreen that restricts wind noise to a bit of swish past the door mirrors, quieter-rolling tyres, better sealing between the engine bay and cabin, and thicker glass in the front side windows.

There's no such thing as a totally quiet car, but this one is quieter than most.

Lots of people offer reversing cameras these days, but trust VW to hide the camera in the boot badge and to keep the lens tucked away until the driver selects reverse gear so that it doesn't get covered in road dirt. See what we mean about attention to detail?

You'll pay more for the new Golf between 500 and 700 over the Mk V, VW reckons. That's a fairly sizeable increase at a time when credit is being crunched and new-car sales need every fillip they can get.

You'd be hard-pressed to argue that it isn't worth it, though. It's all you expect a Golf to be only more.