More for you |
Every 5-star car on What Car?Used test: Maserati Levante vs Porsche MacanNew issue of What Car? magazine on sale nowMost and least reliable small SUVsRevealed: the car makers whose discounts have got bigger since lockdown
Home
News
Doctors seek in-car smoking ban
news 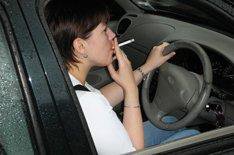 Smoking should be banned in all cars, according to the British Medical Association (BMA).

The BMA says levels of smoke in cars can be 23 times higher than was typically found in pubs before the smoking ban in public places was introduced.

'We are calling on the UK Government to take the bold and courageous step of banning smoking in private vehicles,' said BMA director of professional activities Vivienne Nathanson.

Smoking is banned in company vehicles, but Nathanson believes the evidence for extending the smoke-free legislation is 'compelling'.

The BMA said that children were at particular risk and that 23 die as a result of secondhand smoke every year. This type of exposure to smoke kills 4000 adults annually.

However, the Department of Health said a ban is not likely.

'We do not believe that legislation is the most effective way to encourage people to change their behaviour,' said a spokesman.

'We will be launching a national marketing campaign next year to remind smokers of the risks of exposing children and adults to second-hand smoke and we will be supporting local areas to work in partnership to encourage smokers to change their behaviour.'