Drivers urged to check their tyres 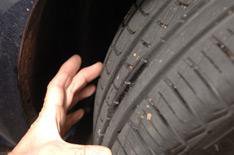 Up to three million drivers aren't doing enough to make sure their tyres are safe.

According to research by the RAC Foundation, almost half of all drivers don't know that the legal minimum tread depth is 1.6mm. One in six say they are unlikely to check the tyre age information written on the tyre sidewall.

While most drivers will wear out their tyres through use long before they deteriorate with age, the RAC Foundation argues that low-mileage drivers, such as owners of classic cars, may not.

Sheila Rainger, deputy director for the RAC Foundation, said: 'Modern tyres are very robust and failure-resistant, but older tyres that have been stored incorrectly or simply not used for many years can become unfit for purpose through the passage of time alone.'

Free tyre 'health checks' are being offered by members of the National Tyre Distributors Association (NTDA) throughout the summer.

These checks will look for cracks on the sidewall, tread separation, deformation and discolouration of the rubber. The full list of 2700 NTDA members is listed on www.ntda.co.uk.