* Computer-generated images * Styling taken from Verve concept cars * On sale in December from 7500... 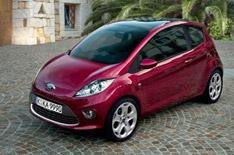 These computer-generated images show how the next-generation Ford Ka could look when it is launched later this year.

The Ka takes styling cues from the Ford Verve concept cars, which have indicated how the next Ford Fiesta will look, which is also going on sale this year.

It shares its underpinnings with the Fiat Panda and 500, and Ford insiders say the ride will be improved. Road and wind noise should also be lower than in the present model.

A performance ST model is likely to follow, using the same 135bhp 1.4-litre turbocharged petrol engine that will power the Fiat 500 Abarth.

We should see the new Ka for the first time at the Paris motor show in September, and it will go on sale in the UK before Christmas.

Prices are expected to begin at 7500.