More for you |
Every 5-star car on What Car?Used test: Maserati Levante vs Porsche MacanNew issue of What Car? magazine on sale nowMost and least reliable small SUVsRevealed: the car makers whose discounts have got bigger since lockdown
Home
News
Ford Verve wins RAC Reader Award
news 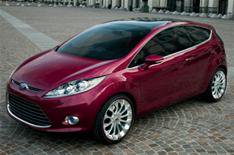 Ford's Verve concept car has won this year's What Car? RAC Reader Award as the most exciting car being launched in 2008.

The Verve shows how the design of the new Ford Fiesta will look when it goes on sale in November.

Readers of whatcar.com and its sister website evecars.com voted for the car, having chosen from a shortlist of 10 new cars that will launch this year.

In announcing the What Car? Reader Award, Steve Fowler, Group Editor of What Car? said: 'The striking looks of Ford's Verve Concept have clearly struck a chord with whatcar.com and evecars.com users.

'It received twice as many votes as the runner up, the new VW Scirocco. That bodes extremely well for the Fiesta replacement, which will follow the Verve's style lead when it's launched later this year.'

When collecting the award, Mark Ovenden, marketing director, Ford of Britain said: 'Recognition for Ford Verve Concept by real customers and enthusiasts suggests we're all in for an exciting year!'

The Ford Verve Concept was unveiled at the Frankfurt Motor Show last year.

The finalised design of the Fiesta is expected to remain faithful to the Verve's styling, and will be unveiled at the Geneva motor show in March before going on sale from 38500 in November.