* Mixed reaction * Some welcome the news * Others think it's not enough... 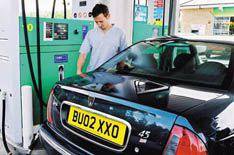 Reaction has been mixed: some people welcome the move, others think it should have happened sooner and still more believe it doesn't go far enough.

Here's a selection of the reaction to the postponement.

The RAC
'This is welcome news but it does not go far enough. We would like to see the Chancellor not just postpone future rises but actually cut fuel duty.'

Edmund King, AA president
'We are delighted that the Chancellor has seen common sense. Many motorists endured months of misery and this is a welcome piece of good news for them.'

Louise Doherty of Petrol Prices.com
'It's good news for motorists everywhere and for the economy, but we think it doesn't go far enough.'

Kate Gibbs, Road Haulage Association
'It's quite a small drop in the ocean. Postponing it is just lip service to what motorists are saying. A far better solution would be to scrap the VAT, because that is the killer and that's what tends to hit motorists the hardest.'

Peter Carroll, a Kent-based haulier and fuel protester
'What's happened today is a little like someone with a gaping wound going to hospital and merely having the blood wiped away.

'What we need is for the haulage industry to qualify for an essential user rebate on fuel which would cut the price of diesel by 25p a litre.'