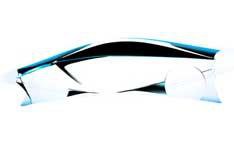 The Toyota FT-Bh concept car will make its debut at the Geneva Motor Show 2012.

Toyota will also have the production version of the Yaris Hybrid at the Geneva show. Weve driven a prototype version of the hybrid-powered supermini, which goes on sale in June.

Another Tokyo concept car the Fun-Vii will be shown at Geneva as the Diji. The entire body of the car serves as a display, which can be changed by the driver.

The production version of the GT 86 coupe will also be at Geneva. Weve already tested the car, which goes on sale in June.