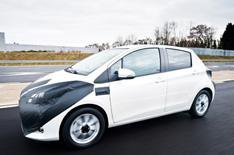 The Toyota Yaris Hybrid will compete with Hondas Jazz Hybrid and a host of diesel models when it goes on sale next summer.

Impressively, Toyota has managed to package the hybrid powertrain within the car without sacrificing any interior space. This has been achieved by extending the nose by 20mm, downsizing the engine from the 1.8-litre unit in the Prius to 1.5 litres, and engineering a lighter, more compact hybrid system.

Toyota hasnt announced prices yet, but looking at the difference between the regular Auris and its hybrid spin-off, a minimum purchase price of 16,000 seems likely.

Whats it like to drive? The electric motor can power the car without the help of the engine for just over a mile and it provides some welcome extra thrust away from rest. However, the Yaris Hybrid is generally a sluggish performer, offering inferior acceleration to both the Yaris 1.4 D-4D diesel and 1.33 petrol model.

Understandably, Toyota says that performance is not what this car is about, and instead points to an estimated fuel consumption figure nudging 80mpg that would translate into CO2 emissions below 85g/km. As impressive as these numbers are, though, theyre only in line with those of eco diesels such as the Volkswagen Polo Bluemotion and Kia Rio 1.1 Ecodynamics.

Turn into a bend and the Yaris is grippy enough, but theres a fair amount of body roll and the steering is disconcertingly numb. To make matters worse, the ride is unsettled on scruffy surfaces and theres a considerable amount of road noise at higher speeds.

Whats it like inside? While theres some soft-touch plastic on the dash, its no more than a sticking plaster on a cabin whose quality is a long way from the class best, let alone good enough for a car thats likely to cost as much as a lower-end VW Golf.

On the upside, theres plenty of space for four in the cabin and a decent-sized boot, despite the fact the latest Yaris misses out on its predecessors handy sliding rear bench.

Should I buy one? This hybrid system is more sophisticated and efficient than the one on the Jazz Hybrid, and if it were attached to a class-leading car, there might be grounds for saying that certain people company car drivers and urban dwellers should consider one. Unfortunately, the latest Yaris is actually pretty poor by the standards of modern superminis.

Unless Toyota prices the Yaris Hybrid to undercut its diesel rivals which seems very unlikely it will be impossible to recommend.